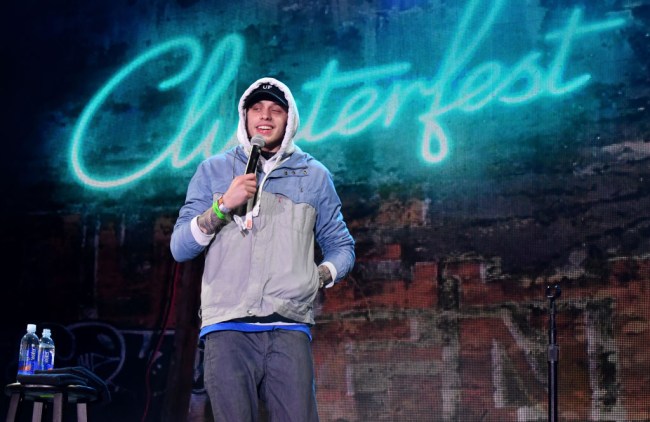 Pete Davidson has come out hard against political correctness and says that thin-skinned audiences have destroyed comedy. The Saturday Night Live comedian said he will no longer perform at the hypersensitive environment of colleges.

In a recent interview with Paper Magazine, Davidson proclaimed that he’ll never perform at colleges again because all of the political correctness.

“I refuse to do a college after this year ’cause it’s like, you’re just setting yourself up for trouble… Comedy is just, like, getting destroyed,” Davidson told Paper Magazine. Davidson joins fellow comedians Jerry Seinfeld and Chris Rock, who have declared that they will no longer attempt to perform comedy at colleges because of its toxic atmosphere.

Davidson warned of the grim future of comedy if the PC police take over. “Standup’s about to be about, like, sneakers. Like, ‘Hey, everyone like sneakers?’ You can’t talk about anything. You can’t,” Pete sneered. “The second you open your mouth and have an opinion, you lose money today. And I don’t think that’s a safe place to live in.”

The 26-year-old SNL comedian pointed out that context in comedy means everything. “Yeah, look, when I’m doing standup and stuff, nothing I ever say is coming from a hateful place. And you can’t know what’s funny until you try it, you know?”

“But anything I’ve ever said on stage or made a joke about, I don’t regret it,” he continued. “I mean, some jokes I’m like, ‘Welp, that joke sucked.’ You know? But I’m never like, ‘Aw f*ck!’ Because there are times I try things that I think are ridiculous and they work.”

“And that’s what sucks about political correctness in comedy, I think that you need freedom,” Davidson stated.

Davidson’s hatred of college campuses hit a crescendo in August when he performed at the University of Central Florida. Davidson went on an expletive-laden rant during a comedy show because UCF students broke his no-cellphone policy.

“You film everything and not enjoy the show for f*cking an hour, then like, I don’t gotta be here,” Davidson told the crowd. “I can just give them their money back because I don’t give a f*ck. So, like, whenever somebody else comes to your f*cking town and wants to perform and is f*cking exhausted and flies all the way to the middle of f*cking nowhere to do jokes for you little privileged a**holes, don’t f*cking ruin the show for people who actually wanna be here.”

“That’s why the world is gonna end in 25 years because you’re all f*ckin’ retarded,” Davidson said of the students. “Yeah, I meant it that way, idiots. You should f*ckin’ grow up.” Then the audience started to boo the stand-up comedian.

A University of Central Florida spokesperson released a statement on Davidson’s insulting rant: “Mr. Davidson’s abusive language, particularly his use of a derogatory slur, is contrary to the University of Central Florida’s values of inclusion and respect for all. It’s disappointing that his rant spoiled an event that was meant to welcome students back for the fall semester.”

You can read the entire Pete Davidson interview over at Paper Magazine.