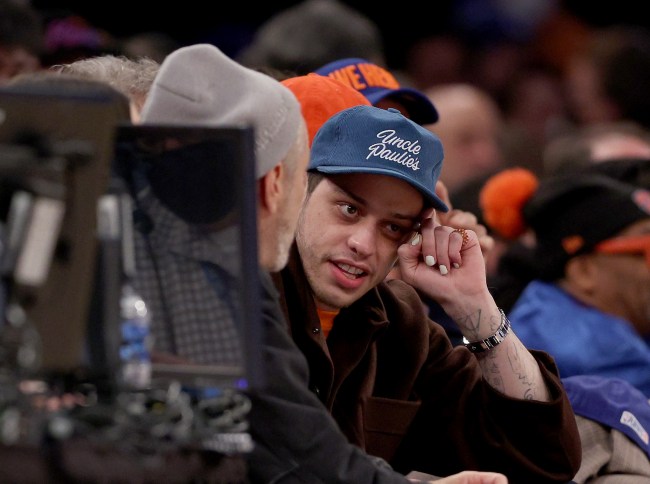 It seems like the Pete Davidson and Kanye West beef keeps getting weirder and weirder as their private matters are publicly aired out.

Recently, alleged text messages were leaked that supposedly reveal Pete dissing Kanye to his face by sending a photo in Kim Kardashian’s bed with the comment, “I’m in bed with your wife.”

Jake Paul even chimed in after these alleged texts and offered Kanye and Pete Davidson $30 million each if they would box each other.

Many were alarmed at Kanye, pointing out the depiction is a form of harassment.

Sometimes the universe likes to insert its own irony into a real-life situation.

Today photos of Pete on the set of his upcoming film The Home emerged. They show Pete outside a New Jersey home drenched in fake blood from head to toe. Pete also has a fake gash on his head.

The photos appear to be in between takes—hence Pete smoking a cigarette casually.

Kanye isn’t involved in any of this, but considering what he depicts in the “Eazy” music video mentioned earlier, he might find some amusement in the whole scene.

As of now Kanye doesn’t have any public thoughts, but I wouldn’t be surprised if he decides to make a comment or two on his socials.

More Information about The Home Film

The Home is being directed by The Purge creator James DeMonaco. Pete Davidson’s character is a man named Max who works at a retirement home.

The film plays out by Max (Pete) discovering the old folks and workers of the retirement home all have something they’re hiding.