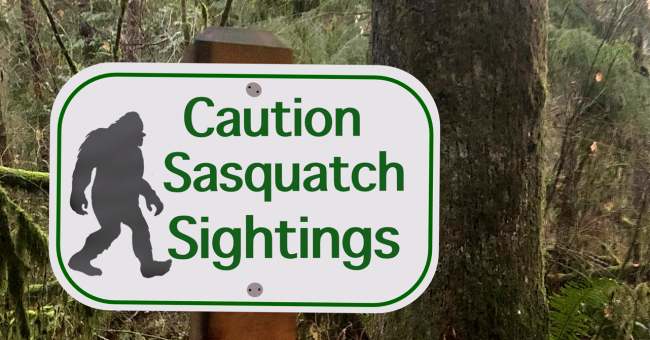 Carolyn Day was hoping to get some good photos of wildlife with her trail camera set up in Washington’s Snoqualmie Valley, but ended up with something she never expected.

As she was reviewing her trail camera photos she believes she may have caught images of what appears to be Bigfoot walking in the forest.

“I just checked my camera that is deep in the woods behind Mount Si in the Snoqualmie Valley… either there is a sasquatch in the area or I’m being expertly pranked,” Carolyn wrote in a Facebook post.

The images do show a very large creature of some sort walking on two legs. It also appears to be rather hairy, but as is so often the case when it comes to Bigfoot sightings, it’s not 100 percent clear what the creature actually is.

One commenter who believes Carolyn may have captured Bigfoot or some other cryptid on film, enhanced one of her photos trying to get a clearer look.

“It has aspects of SkinWalker, Shapeshifter types,” he wrote.

Another commenter wrote, “I have seen Sasquatch’s before. I will mention some things that are correct according to what I have seen. The curve of the calve & the way it bends from the knee, the length of the arm, the way the head hair sticks out over the shoulder hair, (not a seam) both skin & hair on face, deep set eyes! Looks real to me!!”

She later added, “Another thing you may be surprised about is that Sasquatch do not always stay hidden away in deep forests, they have been known to even go into towns, so yes a real Sasquatch can be seen in peoples yards, parks, etc.”

So did she accidentally capture an image of Bigfoot?

Bigfoot sightings are so prevalent, the creature goes by 58 different names in countries scattered around the world (Sasquatch, Yeti, Wendigo, Monkey Man) and in the United States alone it reportedly been spotted in more than a dozen states over the past few years.

“There are things on the planet that have never been seen,” another commenter wrote. “They are making their way forward a little at a time. Just because you’ve never seen one doesn’t mean they don’t exist.”