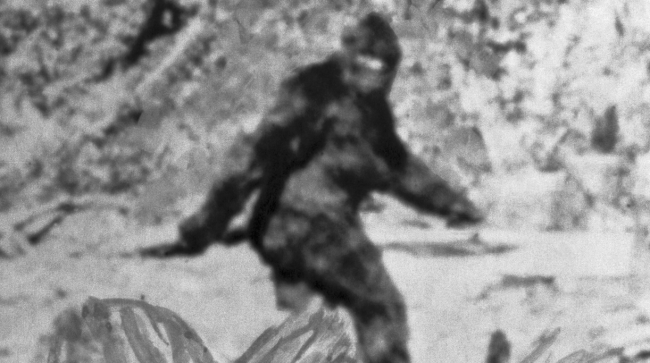 While most people probably don’t believe in the cryptids such as the Loch Ness Monster, Chupacabras, Mothman and the Jersey Devil, the one that might be the hardest to dismiss is the legend of Bigfoot.

Unlike creatures like the others mentioned, Bigfoot is not limited to just one or two specific geographic locations.

Bigfoot goes by 58 different names in countries scattered around the world (Sasquatch, Yeti, Wendigo, Monkey Man) and in the United States alone has reportedly been spotted in more than 12 states just over the past couple of years.

Recently, another sighting of Bigfoot was shared on the TikTok account @cryptiduniversity featuring two men who were filming while traveling down a path in a forest.

As the men talk and pass a fallen tree partially blocking the path, the person holding the camera pans left and for a split second in the distance we see a ape-like creature walking through the woods.

Slow motion replays of that moment clearly show something that definitely looks like Bigfoot.

This TikTok video is just one of dozens of alleged Bigfoot sightings that have been shared by @cryptiduniversity.

Is this Bigfoot footage real or just another in a long line of hoaxes?

While some viewers were impressed by the footage, not everyone is sold.

“Notice the well worn path around the downed tree?” one viewer commented.

“That might be the best footage of big foot on tt,” wrote another.

“Calling hoax on this one,” commented another person.

If it is a hoax, it certainly wouldn’t be the first Bigfoot video to have been faked.

The most famous Bigfoot hoax took place in 1967 and was perpetrated by filmmakers Roger Patterson and Robert Gimlin (the photo at the top of the page is a still from that film).

The Patterson-Gimlin film as it has been dubbed, was shot in the Six Rivers National Forest northwest of Orleans, California and lasts 59.5 seconds.

Patterson appeared on several talk shows to discuss the footage (Gimlin mostly stayed silent) and it became something of a national sensation when CBS broadcast the footage on a show called Monsters! Mystery or Myth which drew 50 million viewers in 1974.

While it was never proven to be a hoax, the sheer number of people who have analyzed the film or claimed to have been involved in its creation, casts a tremendous amount of doubt on its authenticity.