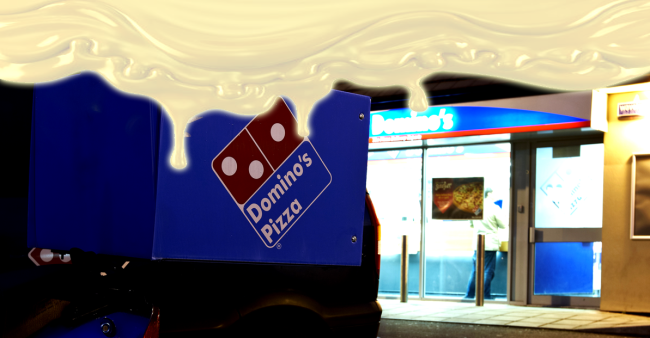 According to NOLA.com, this particular giant blob of pizza dough has gone viral because a woman named Nicole Amstutz has been documenting the unusual growth of said pizza blob on Facebook as it gradually grew and escaped its confines inside a dumpster at a local Domino’s.

Amstutz, a resident in the town of Covington, Louisiana where the Domino’s is located, began tracking the pizza blob’s growth last Wednesday.

“Back in Covington, dominos [sic] threw all of their dough in the dumpster, and now it’s growing into a giant, unstoppable blob,” Amstutz wrote on Facebook.

Amstutz, who calls herself a “Snacktion Reporter,” headed back for another look later in the week.

“Saturday morning update: it’s still there (picture 2), but the dough inside fell and now there are boxes on top. Dough on ground is squishy.”

Reportedly, the pizza blob got its start when employees of the Domino’s threw it out as Hurricane Ida was about to hit and resulted in power outages across the area.

Since then, with all of the moisture, humidity and the temperatures rising into the 90s, the pizza blob has morphed into looking like something out of a horror movie.

The general manager of the local Domino’s did not immediately respond requests for comment from NOLA.com, but hundreds of people on Facebook weren’t nearly so shy.

“The infestation of rats that’s gonna come their way,” someone wrote.

“They didn’t bother to throw the toppings on it?” joked another.

“Somebody needs to call Ghost Busters!” another wrote.

“Go put googly eyes on it,” one person commented.

“I feel like we may have read an R.L. Stine book very similar back in 5th grade!!” someone else observed.

“This is the reporting I’m here for,” laughed another.