These Are The 5 Most Common Plastic Surgery Procedures For Men 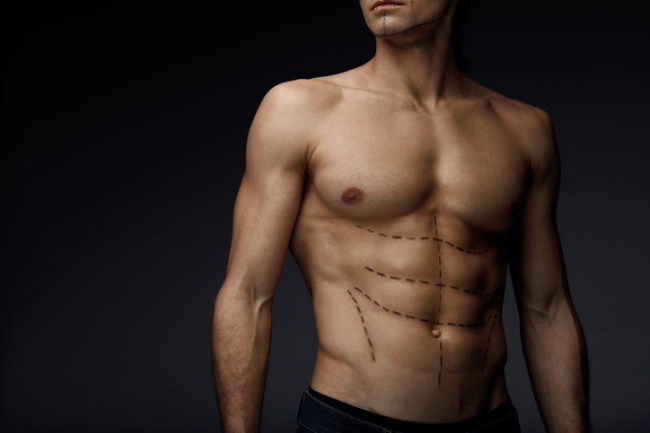 It was not all that long ago when having a face that showed off a little rugged masculinity was considered attractive.

These were the guys that weren’t exactly dashing by Hollywood standards, but they still had a certain allure, kind of like a drunken lumberjack that hasn’t showered in a couple of days, that the ladies seemed to enjoy.

These bearded, pockmarked bastards sure as shit weren’t revered as cute, but they didn’t quite look like they had been beaten profusely with an ugly stick either.

But then some sort of collision happened between the clean-cut – a group often referred to as pretty boys — and these rugged specimens that spawned a new definition of what it means to be a good looking man.

It almost seems that, somewhere along the way, the beautiful people in the world started slumming it, and subsequently gave birth to a legion of weird-looking dudes with less than impressive features.

It could be argued that the drug culture had something to do with this rise of the modern-day mutt. Those guys that appear as if they were squeezed out of a wolf’s snatch in the dead of winter and rolled face down in a sticker bush before being left to fend for themselves.

The ones that survived now roam the Earth, and are apparently looking to plastic surgery as a way to fit in with civil society.

Although plastic surgery was once most prominent among the female population, the American Society of Plastic Surgeons is reporting an almost 30 percent increase over the past two decades of men going under the knife to fix qualities that they perceive to be unattractive.

This wild trend goes way beyond the insanity that is calf implants and other silicon enhancements. Men are now leaning on a variety of cosmetic procedures from nose jobs to hair transplants to look a certain way.

This uptick in the snip, snip could stem from not feeling as though they are living up to the unrealistic body types that are often portrayed in the movies and men’s fashion rags. Or they might just be lingering insecurities from childhood.

Whatever the reason for this new nip-tuck attitude, guys are throwing their vanity over their shoulder and heading to the operating table more than ever.

These are the five procedures that are done the most:

Men appear to have more problems with their snouts than any other body part. Statistics show that surgeons all across the United States performed around 52,000 nose jobs on them in 2018.

Without a doubt, some of these surgeries were likely done to correct the damage done in a bare-knuckle brawl.

For that one time when they got completely obliterated on cheap tequila and told the biggest dude in the bar that his old lady looked like a wildebeest fart.

That’s always an excellent way to get the old schnoz knocked flat and lopsided.

But we’d hate to think that tens of thousands of bros are out there running their mouths so much that they need rhinoplasty after the fact.

If this is the case, we might suggest drinking at home from now on. At least until after that nose job heals!

Inevitably, however, we feel the bulk of these surgeries are simply dudes that are unhappy with the shape of their sniffers and believe a surgical reshaping will make them more appealing to the ladies.

The second most popular cosmetic procedure for men is eyelid surgery. Now, you’re probably like us and wondering what the fuck could be so wrong with the skin around someone’s eyes to warrant an expensive surgical fix.

Well, it all appears to be vanity-related.

Men are getting this operation to fix the bagginess and sagging that often occurs as a result of aging.

It is mostly men feeling insecure about closing in on their elder years and still wanting to look good enough to get laid on occasion.

For some, the surgery is a better alternative than just moving on to a darker tavern and lowering their standards to chain-smoking mutants and other raspy-voiced downtrodden of the barstool scene.

At first, we thought that maybe men were gravitating toward this procedure because it had the words “lip” and “suction” in it.

But it turns out that guys are actually having liposuction as a means for trimming the fat that they can’t seem to get rid of through regular diet and exercise.

In some cases, guys are eating right and working their asses off in the gym but, because of a variety of factors, their bodies just aren’t responding at full throttle.

There are also those situations where dudes continue to treat their bodies like a Mississippi whorehouse by filling them with trash, with the understanding that their fatass problem is nothing that money and stitches won’t fix.

We never thought we’d live to see the day when men were paying money to see smaller breasts, but it is a brave new world, you know?

Apparently, while most dudes prefer the fairer sex to sport a massive chest, they are not at all keen, themselves, about walking around with Double Ds.

It’s really too bad that Kramer and Frank Costanza were never able to come together on their male support garment affectionately known as “the Bro”…or, was it the “Manzierre?”

Although baldness is fashionable in this day and age in ways that it never was before, some guys just are not ready to embrace a head full of skin. It is, for this reason, that hair transplants are the fifth most sought after surgical procedure for men.

They just can’t function without a thick coiffure of ass hair stitched into their scalp to help them exude confidence. Might we suggest investing in a nice razor and skin it on back, jack! Either that or get a massive tattoo on it.

We’ve got to believe that anything is better than a head full of fart-catching locks that once collected dingleberries.

But whatever. Just do what you’ve got to do to keep from being lumped into the same category with those wolf born motherfuckers we mentioned earlier.