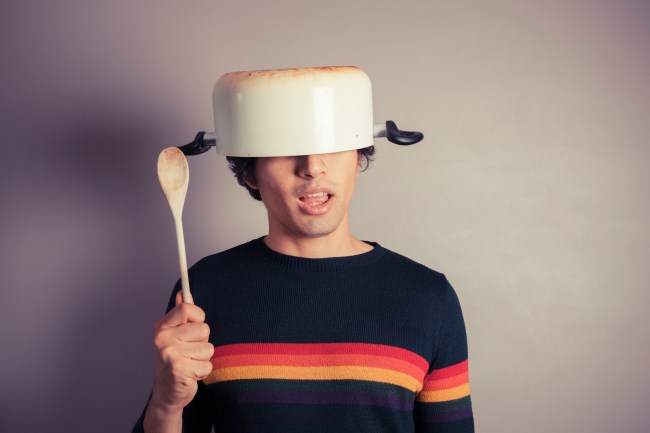 Everyone knows somebody that is a know-it-all.

These are the people that no matter how much evidence there is pointing to something as being factual, they will argue with everyone in the room about the legitimacy of those facts.

In their minds, they are smarter than the entire planetary population, and it is for this reason that their loud-mouthed, opinionated stance on every subject from politics to proper grilling techniques must come spewing out whenever they get around others.

These insufferable characters are known for invading conversations with their “I’m right, and your wrong” attitude and they would instead be eaten by wolves, dick first, than ever admit to making a mistake.

If there is any doubt that you have ever been around one of these bright boys, just think back to the time you were at that one party and had the overwhelming urge to jump out of a window and end it all. Chances are, those suicidal tendencies were triggered by a dreadful encounter with a know-it-all schmuck.

But while these outspoken individuals might have you believe that they possess big, badass brains full of all the knowledge in the universe, a study shows that these clowns are really just dumbasses with no fucking idea what they are talking about.

In a recent issue of the Journal Nature Human Behavior, researchers show how these opinionated people are really just suffering from an “illusion of knowledge” that essentially makes them think they are smarter than they really are.

“Extreme views often stem from people feeling they understand complex topics better than they do,” Phil Fernbach, the lead author of the study, told ABC News.

If you are involved in the business community, you run into these garrulous specimens all of the time.

At first, they come across as being jam-packed to the eyeballs full of shit – the kind of person that believes he can’t fucking lose as long as he keeps his lips flapping — but then you start to realize that, holy hell, this bastard actually believes everything coming out of his mouth. It is a painful experience, to say the least.

But for this particular study, researchers used the topic of genetically modified food to find out more about this repulsive breed of human.

Although these foods are generally considered fit for consumption and mostly supported by scientists, around 60 percent of the American population believe this process is nothing more than the evil spawn of Satan.

So, researchers dug in and polled a few thousand people to try and gauge their knowledge on this subject in hopes of determining whether their opinions were rooted in actual stats or a steaming pile of crap.

What they found was the people who were staunchly opposed to the concept of genetically modified food, presumably the same ones who believe that cannabis cures cancer, were entirely out of touch with science. What’s worse is these arrogant pricks really thought they knew more about the matter than the experts.

This outpouring of unwavering ignorance is not just confined to the subject of genetically modified food.

Researchers found that these numbnuts believe they are mentally superior when it comes to everything from operating household appliances right down to solving complex worldly issues.

In other words, these fools genuinely believe they have it all figured out, and that we, as the dipshits and peons of society, should all just stand there and listen attentively the next time one of them decides to school us.

Or you can handle these chatty dregs the way we do.

Just when they’ve proven incapable of closing their trap, just say “Excuse me, I need to grab another beer” and then evacuate from the unsavory scene.

This is better than continuing to stand there while their incessant rambling tricks you into whacking them in the throat with an empty bottle.

We hate to break it to you, but they are not going away anytime soon – these know-it-all types.

Researchers say that since we must first convince them that they don’t know jack-shit, a civilization free of these academic cripples may never exist.

“Our findings suggest that changing people’s minds first requires them to appreciate what they don’t know,” said study co-author Nicholas Light, a Ph.D. candidate at the Leeds School of Business. “Without this first step, educational interventions might not work very well to bring people in line with the scientific consensus.”

But never fear. We’re pretty sure that the scientific consensus tells us that a good old fashioned dick punch is effective in silencing pseudo-geniuses that can’t seem to learn when to shut the fuck up.

But knowing these types of people, not even a set of swollen nuts will keep them down for long.