Can You Die From LSD? Here’s An Expert Opinion On The Possibilities 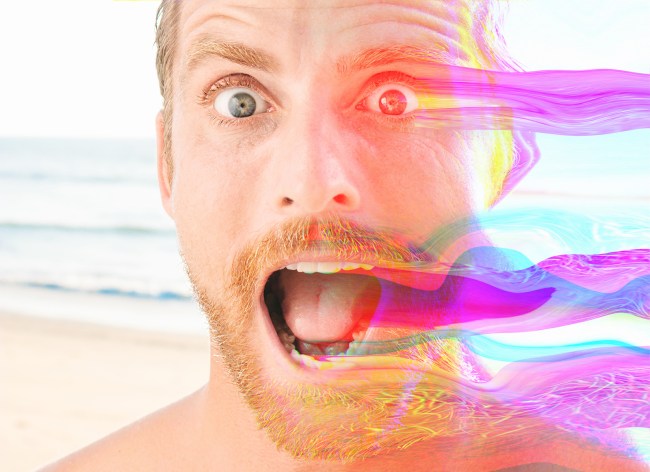 Okay, so you’ve just dropped LSD, which is short for Lysergic Acid Diethylamide, but we know, we know, you don’t have time for a science lesson right now because your face is contorting in terrifying ways and you now bear the striking resemblance to the Toxic Avenger.

There are also those snakes having sloppy-serpent sex underneath the dish towels in the kitchen and, well, the music just keeps getting louder and louder no matter how many times you turn the volume down on the stereo.

This psychedelic trip began with all fun and games, and then somewhere after the first thirty minutes of elation, things took a turn for the bizarre.

Now your tongue is so goddamned swollen that while standing in front of the bathroom mirror trying to figure out if your eyes are really that black, you’re also starting to have some concerns that you might choke on the goddamned thing as it descends into your guts to suck out your soul.

You’re also starting to have some concerns that you might choke on the goddamned thing as it descends into your guts to suck out your soul.

It is even possible that while you are reading this informative, life-saving piece, the voice coming out of your mouth sounds a whole lot like, “Well shithead, you went and done it now. Your brain is going to come oozing out of your ears, and you’re going to die! Do you hear me, Technicolor Terry, you are worm food.”

But is it really possible to succumb to the death rattle from just doing a little (or a lot) of acid?

Well, we hate to break it to you, but you… are… doomed.

Although it is common sometimes to see and hear reports of some poor bastard dropping dead from an overdose of LSD, this drug is actually one of the safest illicit substances in the world.

If you are tripping dicks right now, we realize this sentiment may be a little difficult to digest considering all of the dreadful hallucinations that could be erupting all around you.

But, rest assured, that’s just the mind’s way of having a little fun before it opens the trapdoor to another dimension and reveals insights that could never be realized under a sober tongue.

Even one that is swollen.

Not surprisingly, federal agencies like the U.S. Drug Enforcement Administration attempt to convince the general dope-doing public that LSD can cause a variety of health issues up to and including death, but the fact of the matter is acid just does not come with the same savage, deadly repercussions as hardcore substances like opioids, methamphetamine or even cocaine.

These drugs kill tens of thousands of people every year.

However, In the interest of full disclosure, the CIA did run an experiment back in the 1960s where they reportedly killed a 7,000-pound elephant named Tusko by injecting it with a massive dose of LSD.

Why would they do such a thing? Well, apparently, the agency was hellbent on determining whether the hallucinogenic – a drug that was new and exciting at the time — would induce a condition known as “Musth,” which puts elephants into kill mode.

Once again, why? Maybe the CIA was hoping it could weaponize pachyderm, but who the fuck really knows?

What we do know is the experiment didn’t quite work out.

“Five minutes after the injection he trumpeted, collapsed, fell heavily onto his right side, defecated, and went into status epilepticus,” the study reads. “The limbs on the left side were hyperextended and held stiffly out from the body; the limbs on the right side were drawn up in partial flexion; there were tremors throughout. The eyes were closed and showed a spasm of the orbicularis occuli; the eyeballs were turned sharply to the left, with markedly dilated pupils. The mouth was open, but breathing was extremely labored and stertorous, giving the impression of high respiratory obstruction due to laryngeal spasm. The tongue, which had been bitten, was cyanotic. The picture was that of a tonic left-sided seizure in which, mild clonic movements were present.”

So, if you’re reading this, all starched out on the floor and you’ve just shit your pants, go ahead and call 911.

But you should know that the outcome of the CIA’s elephant research is the subject of some controversy. Researchers were not able to determine, without a shadow of a doubt, that LSD was the cause of Tusko’s death.

There were other drugs administered in an attempt to stop the elephant from suffering a fatal overdose. Critics say that those substances could have contributed to the demise of the animal. Still, to this day, there is no evidence that LSD killed Tusko.

While you might be freaking out right now and convinced that you are going to die from an LSD overdose, chances are you will be fine. There haven’t been any recorded deaths in history in which LSD alone was the cause.

“One of the reasons (LSD) was researched in the 1950s and ’60s for application and was later used recreationally, rather widely, is because it’s a relatively safe psychedelic,” Manning Walker, EMT, crisis worker, and drug expert explained in a recent interview with the Register-Guard.

“There are minimal metabolic and physiological side effects. It has minimal impact on things like blood pressure and respiratory rate,” Walker added. “However, because it does cause an altered state, it can cause exacerbated emotional responses to stimuli, and it can exacerbate underlying psychiatric issues, and that’s true with any psychedelic.”

It is also important to note that tripping LSD might be dangerous for psychedelic novices or those hell-raisers out there that like to go full-blown Belushi when it comes time to party. Although fatal overdoses from LSD are unheard of, mixing the substance with other drugs and alcohol can be a bit unpredictable.

We’re not necessarily talking death here, but LSD has a strong enough hold on the mental state of a person without tossing a bunch of other chemicals into the mix.

“One of the things we see quite commonly among teenagers and people that are new to drugs, in general, is the sort of recklessness and general unawareness of interactions,” Walker said. “So at things like high school-aged parties and college-aged parties, we often see a broad base of alcohol consumption mixed with other substances. And that can be various pills, that can be psychedelics, that can be THC, ecstasy or other party drugs.”

Okay, well, now that you know doing LSD is not going to put you in an early grave, we suggest trying to enjoy the experience while you can. If the drug is any good at all, you’re probably going to be locked into a 10-12 hour ride complete with highs and lows that will undoubtedly test the stability of your mind.

Hopefully, you have a trip partner who can help talk you down when things get hairy. If not, you will surely be a little bit different by the time it is all said and done.

Just stay away from mirrors (never look at yourself while tripping) and avoid those godforsaken snakes breeding in the kitchen. And if the phone rings, for the love of everything holy, do not answer it.

[via The Register Guard]