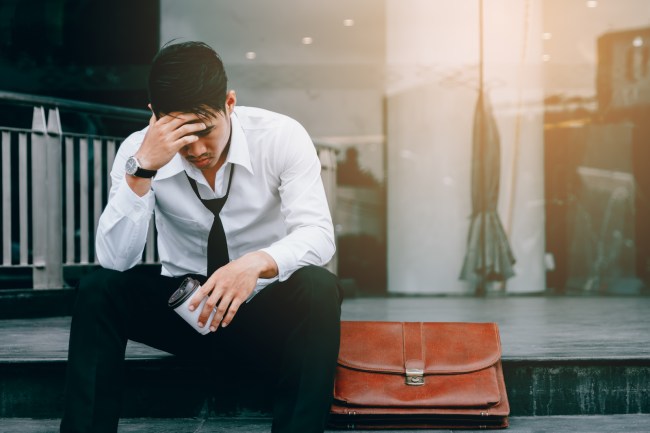 It doesn’t matter what kind of well-endowed workhorse a person might be, grinding it out at a job on a daily basis for hours on end can take its toll on their emotional stability.

A dark turn can happen rather fast.

But it’s not your fault!

You see, we are taught at an early age that if we don’t get the fuck out of bed every morning bright and early and sweat it out somewhere for at least eight hours each day, we will end up broke and performing ornery tasks under a bridge someplace.

But what we’re not taught is that while work is indeed one of the necessary evils of life, it is still probably a good idea to strike a balance between earning a paycheck and some good old fashioned fun.

Otherwise, all of our tired asses could end up going on a full-blown freak-out and end up cutting our wrists all the way to the unemployment line.

With all of the pressures of the workforce in this day and age, it is probably a good thing that the World Health Organization (WHO) just came out and said that job “burnout” is now considered a legitimate health concern.

The agency has officially deemed the act of working too hard to be an occupational phenomenon, and it wants medical professionals to be aware of it and understand its symptoms.

So, if a person has “feelings of energy depletion or exhaustion; increased mental distance from one’s job, or feelings of negativism or cynicism related to one’s job; and reduced professional efficacy,” the agency says that’s a pretty good indicator that they may need to take a day or two to collect their shit.

It seems the stress is just too much for some people performing the same tasks day in and day out for 40-plus hours a week. So for obvious reasons, they become bored with their duties, which puts their performance in the crapper and their overall attitude goes down in a flaming pile of fuck-it-all.

We’ve all been there before. Hell, some of us are probably there now. It’s the point where all of the work-related chores that were once tolerable – maybe even enjoyable — all of a sudden become too painful to endure.

So excruciating, in fact, that not even those regular 5pm self-medicating sessions over beer and shots of ripple can bring reprieve.

And you know the situation has evolved into something gruesome when an employee starts smoking weed every day just to numb out the office of the mundane, but they still feel like telling the boss to go fuck himself straight to Hell.

At this point, the idea of collecting unemployment for an indeterminant amount of time and, who knows, maybe just sitting around in their underwear trying to finish that goddamned novel they’ve been working on for the past year and a half sounds more appealing than ever stepping into that fucking place ever again.

We can certainly empathize.

But WHO wants everyone to understand that their classification of “burnout” in the agency’s handbook of medical diagnoses is in no way intended to suggest that the inability to manage workplace stress is a legitimate medical condition.

They just want health pros to understand that this could be the source of mental health and even physical conditions (heart disease, for example) and should not be discounted when it comes to sizing up the troubles of their patients.

This is especially important for health experts to have in their diagnostics arsenal, considering that a recent poll shows that Americans are some of the most miserable bastards in the world. It is presumably because we are all overworked, not getting enough vacation time and are forced to pay insane rates for cut-rate health insurance.

Toss in the fact that the majority of the population tries really hard to exist solely on fast food cuisine, Frappuccino’s and various combinations of prescription drugs and it’s no wonder that our red, white and blue civilization has gone diaper brown.

But most of us are too broke to see a doctor every time we start to suffer an occupational overload. We need coping methods at home and on the job to help keep us from going over the edge.

The first thing a person can do is try to get more sleep, according to Psychology Today.

Going into work dog-ass tired because you were up all night trying to prolong a new day is not going to shake out in your favor. It is also essential to find time for physical activity (even a 20-minute walk can help) and meditation.

All this means is taking some quiet time away from the grind to shut your eyes and clear your head. It might not be a bad idea to try to find a few minutes for a nap either.

It is ridiculous that most humans are forced to work long hours without getting anything more than a brief lunch break to recharge.

Companies like Ben & Jerry’s, Google and Nike understand that all of this exhaustion and burnout is a detriment to productivity.

This is one of the reasons they provide their employees with on-site napping areas. They want them to hit the reset button throughout the day.

But when neither the constant boozing and nap-time meditation seems to make the situation any better, it might be time to consider moving on to something else – a job that doesn’t eat away at your soul.

We realize that this might be easier said than done – most of us cannot just change careers or positions on a dime – but that doesn’t mean you shouldn’t take small steps every day towards making your life better.

Any progress at all makes more sense than drowning in a constant state of misery.

It should be the goal of us all to distance ourselves from raging asshole bosses and find joy in the work that we do.