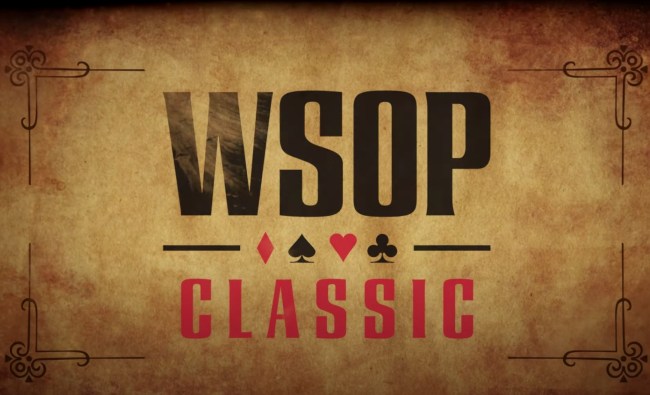 The 2020 World Series of Poker was canceled this year which is an immeasurable bummer for everyone in the Poker community. The 2019 World Series of Poker consisted of 90 bracelet events which took place from late May through mid-July. While it’s not the only event on the annual Poker calendar, it is by far the biggest event throughout the year.

PokerGo is stepping in to help out anyone looking to get their Poker fix this Summer by re-airing classic WSOP episodes. Their “WSOP Classic” event will air 134 classic WSOP Main Event episodes from the years 2003-2010, the height of the Poker Boom. These episodes will include the legendary victories from Chris Moneymaker, Jamie Gold, Joe Cada, and more. The episodes will air each night on PokerGo at 7pm and run daily through July 24th.

In a press release, PokerGo announced what Poker fans can look forward to this Summer:

“WSOP Classic” will kick off the first week of June on PokerGO with footage from 2003’s WSOP Main Event. Day 1 of each year’s event will premiere on Monday with each tournament’s Final Table premiering on Friday night at 7pm ET. The series will highlight 7 years of WSOP Main Events in 7 weeks, focusing on a different year each week. Additional episodes of “WSOP Classic” will include iconic preliminary events from years past like Doyle Brunson’s 10th bracelet, a Phil Ivey bracelet in 2005, as well as the Poker Players Championship in 2007 and 2008, and the 2009 $40,000 40th Anniversary No Limit Hold’em Event, among others.

As an Independence Day weekend special, PokerGO will air the first ever televised WSOP Main Event from 1973 on the Fourth of July followed by a throwback marathon on July 5thwhen the 1987, 1988, and 1989 WSOP Main Events will be broadcasted in succession.

“The World Series of Poker is a tournament with unmatched, electric energy that we celebrate annually across the globe with our community,” said J.R. McCabe, Chief Business Officer of Poker Central. “Since we are unable to partake in the live tournament as we usually would this summer, we decided to bring some of the most memorable games in WSOP history, many of which have not been available for broadcast since original airing, into the homes of fans and players alike.”

Here’s an example of what fans have to look forward to this Summer:

If you’re not familiar with PokerGo, it’s really the only place on the Internet to stream live high-stakes poker tournaments year-round, when those events are taking place under normal circumstances. You can also watch episodes of High Stakes Poker as well as the Poker Masters, U.S. Poker Open, Australian Poker Open, Super High Roller Bowl series, and more.