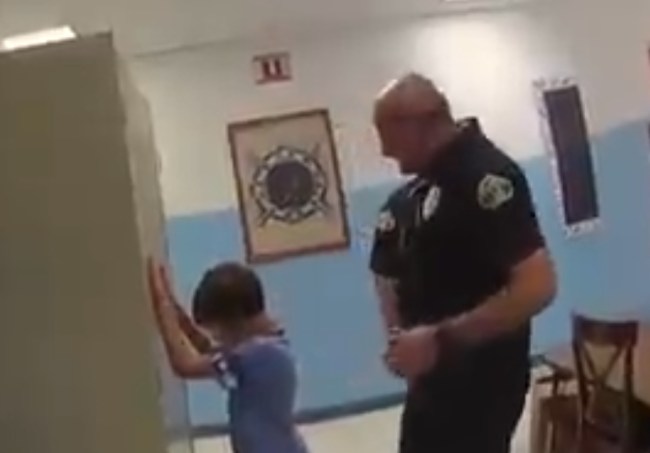 A new video has appeared online from a 2018 incident at an elementary school in Miami, Florida in which an 8-year-old special needs child was handcuffed and escorted out of school for assaulting a substitute teacher.

The newly-revealed bodycam footage shows two Key West police officers telling a sobbing child that he’s going to jail. One of the officers puts the kid up against a filing cabinet and frisks him for weapons.

Unbelievable!! @KWPOLICE used “scared straight” tactics on 8yo boy with special needs. He's 3.5 ft tall and 64 lbs, but they thought it was appropriate to handcuff and transport him to an adult prison for processing!! He was so small the cuffs fell off his wrists! pic.twitter.com/iSTlXdKas6

According to an arrest report obtained by the Miami Herald, police were called to Gerald Adams Elementary on Dec. 14, 2018 after the child allegedly punched a teacher in the chest.

In the police report, the teacher claims the boy repeatedly refused to sit properly in his cafeteria seat so she asked him to take a walk with her. The child allegedly struck her and said, “My mom is going to beat your a–.”

Officers arrested the boy and charged him with felony battery.

The video was posted on social media by civil rights attorney Benjamin Crump. Crump is representing the boy’s mother in an upcoming federal lawsuit against the officers, school officials, the city of Key West and the Monroe County School District.

The attorney stated that the child has special needs and was placed with a substitute teacher “who had no awareness or concern about his needs and who escalated the situation by using her hands to forcibly move him.”

This video is perplexing for so many reasons. First, why were the police called to handle an 8-year-old child? Second, why was the child treated like a criminal and removed from school without his parents being called?

If this is some “scared straight” style tactic to keep the kid in line, it’s been well-documented that these ploys are ineffective.

Key West Police Chief Sean T. Brandenburg said in a statement Monday that his officers did not do anything wrong. “Based on the report, standard operating procedures were followed,” he said.