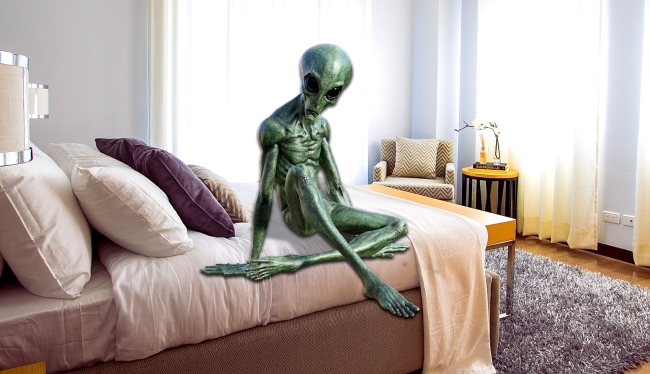 As we all know, the real truth about UFOs and aliens is out there. The government has all but admitted it and numerous former and current officials have gone on record with statements basically confirming extraterrestrials are real. So, naturally, someone else who would have knowledge of such things would be a End Times preacher named Sharon Gilbert.

Gilbert knows all about the aliens because, she says, one of them came to her disguised as her husband and tried to make love to her.

During a recent appearance on The Jim Bakker Show (yes, that is still somehow something that exists), Gilbert explained, “After Derek and I got married this other Derek appears in our bed. The real Derek is lying down next to me, other Derek sits right up out of him. It startled me. I knew that was not Derek and so I asked this critter, who are you? Because he clearly wanted to have sexual relations. He said, ‘I am your husband.’”

Gilbert, the co-host of SciFriday, billed as “Science news from a Christian worldview,” added, “He had the nerve to claim to be, Xerxes. Other Derek seriously wanted to invite me, to use my free will to do something that was going to pull me away from God.”

Of course, this shape-shifting reptilian alien wasn’t just going to have his way with Gilbert.

“This last time I knew he was really desperate and I asked him again ‘who are you?'” she continued. “He told me the same answer and I said ‘I am not going with you.’

“This was an internal dialogue, finally I said I have had enough, in my mind.”

End Times preacher Sharon Gilbert says that an alien imitated her husband, and then it tried to have sex with her, and then it claimed to be Xerxes, and then Jesus got involved, and then the alien turned out to be a reptile with a posse of gargoyles. pic.twitter.com/aBqC2IMSqn

“I reached up, I grabbed his face and I said, ‘You are a liar and Jesus is real.’ I pulled that face off and beneath it was a reptile,” Gilbert revealed.

For the uninitiated, the Anasazi, AKA the Ancestral Puebloans, were an ancient Native American culture, which, allegedly were visited by a shape-shifting reptilian god who kidnapped them and took them to the moon.

So… is Sharon Gilbert on to something? Do shape-shifting reptilian aliens really exist? And why did this particular alien want to sleep with her? So many questions have been left unanswered.

At this point, you really have to wonder how delusional someone would have to be before hosts on an evangelical show would cut away and say, “Sorry. We’re not sure what that was, but it has nothing to do with our faith. Be right back after this short break.”

Wait so she believes in Jesus but yet an alien is also real?
I missed that part in the bible.
When in the 7 days did god have time to create aliens?

LMAO "It startled me ".
Other body comes out of sleeping husband and it was only startling ?
Startled is when a bird flies by you too close.When a being comes out of hubby,that is an under reaction.

So she pulled off his face to reveal the reptile within. What did she do with the fake face that she pulled off of the reptile? Was it still in her hand when she got Jesus into the game? Does she still have it? Just asking.……

This is the funniest thing I’ve ever seen in my life; where can I find more comedy gold like this?? Is there a playlist somewhere?

The guy nodding isn't just a host going along with their guest. That's actually her husband.https://t.co/d12yBPHPLr

It must be a true story then.

Her husband, Derek Gilbert, even responded to one of the tweets about her.

I’ve been married to her for 23 years. No regrets.

This thread reveals a lot more about you all than it does her.

Just for the record…

I'm Xerxes. Just want to clear this up. I did not have sexual relations with that woman.
I do sometimes crumble into reptiles in the night however. Healthcare is too expensive to get it checked out though so it just keeps happening.