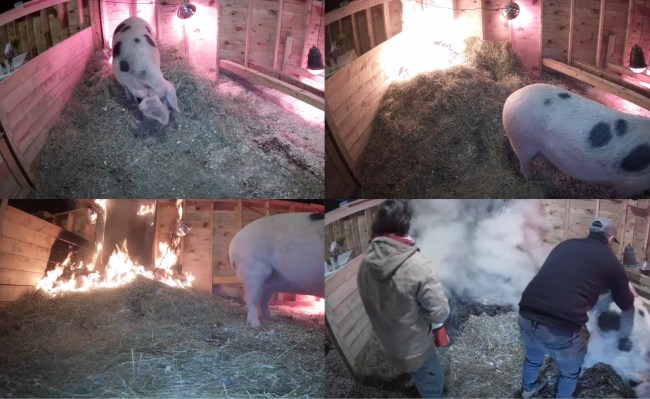 I’ve watched some weird live streams in my time. I’m a HUGE fan of the Katmai Falls Bear Cam in Alaska where we get to see the bears and occasionally wolves feasting on salmon all Summer. There are a few other nature cams I’ll check in on every now and then just to see what the world looks like outside of my office. But I cannot for the life of me say I’ve ever watched a live stream of a pregnant pig. The YouTube below has a glorious soundtrack that makes all of this extremely dramatic so make sure you check that out for the full effect because it’s excellent.

What happened is this, the pregnant Gloustershire pig named Ethel started a barn fire that would’ve likely burned the entire barn down and taken Ethel’s life along with the life of another pregnant Gloustershire pig. There was a live stream of the pig and randomly, someone who visited the farm a few weeks prior hopped onto the stream to see if Ethel had given birth yet.

Laura Palladino lives 60 miles away from the farm and started frantically trying to call the farm and the Fire Department. She had to explain to the emergency workers that she was watching a live stream on YouTube of a pregnant pig in a barn and that barn was on fire.

Palladino was able to get in touch with the farm. Farmhand Joshua Vics and the Owner Matt Baumgartner helped get the fire under control until fire crews arrived.

“My mind immediately went to the worst. My heart dropped into my stomach,” Vics said. “I don’t like to think about how bad it could have been if she didn’t say something,” Vics added. (via News10)

June Farms put up this clip of Ethel setting the barn fire by bumping the heat lamp which ignited the straw and then they added some highly dramatic music that makes it all better. Enjoy:

Ethel’s piglets are due to be born any day now and you can still check out the ‘June Farms Swine Cam‘ for the live stream of Ethel’s birth. Just click that link to head on over to YouTube.

As far as I can tell it looks like Ethel’s sleeping at the moment. And for what it’s worth, June Farms looks like an absolutely lovely place. You can check out the farm’s website here for visitor information.

The closest thing I can think of is that live stream of April the pregnant giraffe a few years back that went viral but this is a pig. There are an estimated 677.6 MILLION pigs in the world. Dedicating a live stream to a single pregnant pig seems extravagant when they’re a dime a dozen but I’m glad June Farms in West Sand Lake, New York (upstate) did otherwise we wouldn’t have had this footage.