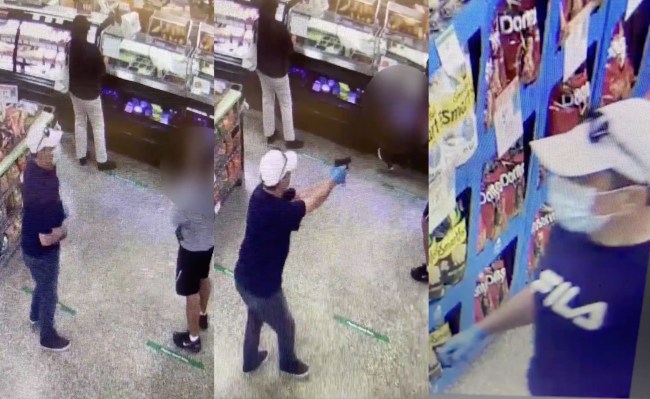 The certifiably awful person didn’t consider the fact that it was Mother’s Day so the store was busier than usual and in the middle of a health crisis so extra precautions are being taken which all but ensure slower-than-normal service anytime you go to the grocery store.

This person just could not be bothered to wait. To them, their time is more precious than a stranger’s life. At least that’s the message they were sending.

According to reports from other customers in the store, the person who pulled the gun was complaining about how long it was taking at the deli before staring blankly at another customer. He then pulled the gun and pandamonium unfolded as Publix shoppers and employees were justifiably freaked out:

Although no one was injured, the footage shows employees and shoppers running away in a panic, fleeing the South Kirkman Road store.

Robeletto told News 6 that the gunman was complaining about how long it was taking to get his items.

“He was saying, ‘Why is it taking so long and blah blah blah.’ He just started staring at me,” Reboletto said. “I took my glasses off and I said, ‘Do we know each other?’”

Police said before the incident, the gunman was shopping for Mother’s Day gifts. Video shows him with large balloons inside his cart. (via ClickOrlando)

WHO IS HE: We're hoping new surveillance video will help us identify a man who pulled out a gun in Publix the day before Mother's Day! He appeared to go from shopping for flowers, balloons, & steaks – to scaring a lot of people. Call us or @CrimelineFL 800-423-TIPS w/ any info. pic.twitter.com/gis3oPXB5f

Orlando Police are asking anyone who might know the identity of this person to come forward but all they have to go on was the outfit he was wearing (White Hat, FILA shirt) and the items he was shopping for. Shopping at Publix is a pleasure and we don’t need people like this ruining that experience.

Stress causes people to do crazy things and I cannot think of a more stressful time in recent memory than the past two months but pulling a gun on a stranger because you are waiting at the deli is so wildly unacceptable that there are barely words to describe how selfish, stupid, and dangerous this was. Hopefully, the Orlando Police are able to track this person down or they turn themselves in as they 100% should.