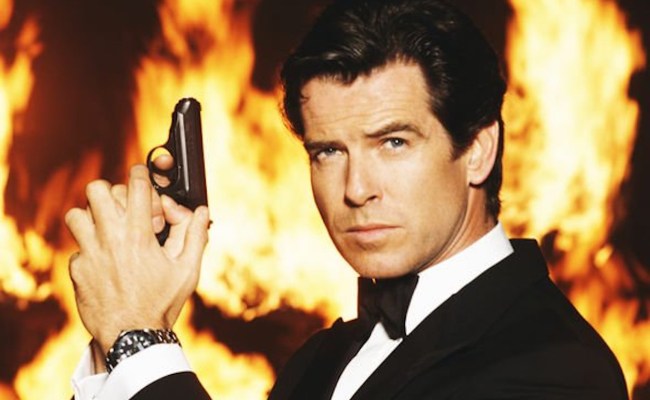 For all of the already iconic movies he has made, the list of Quentin Tarantino’s unmade projects is almost equally as impressive.

From an R-Rated Star Trek movie to Kill Bill 3 to a Luke Cage movie with Lawrence Fishburne to Killer Crows (a movie about an all African-American WWII platoon), there’s a long and extensive history of Tarantino projects that never came to be. And according to former James Bond actor Pierce Brosnan, a Tarantino-helmed 007 flick can be added to that list.

In a recent interview with Esquire, Brosnan revealed that back in the early 2000s — before Daniel Craig took over the role in 2006’s Casino Royale — QT once drunkenly and profusely pitched making a Bond movie together.

It was after Kill Bill: Volume 2, and he wanted to meet me, so I went up to Hollywood one day from the beach, and I met him at the Four Seasons. I got there at 7:00 – I like to be punctual. 7:15 came around, no Quentin, he was upstairs doing press. Someone sent over a martini, so I had a martini, and I waited till 7:30, and I thought, where the heck is he? Word came down, apologies, so I thought, okay, I’ll have another martini.

He was pounding the table, saying you’re the best James Bond, I wanna do James Bond, and it was very close quarters in the restaurant and I thought, please calm down, but we don’t tell Quentin Tarantino to calm down. He wanted to do James Bond, and I went back to the shop and told them but it wasn’t meant to be.

No Quentin Tarantino for James Bond. What a shame, that would have been a good one to watch. [via Esquire]

While I don’t know exactly how insane Tarantino’s vision of James Bond would be, I definitely know that he’d be riddled with an intense cocaine addiction. That’s just how Tarantino does it.