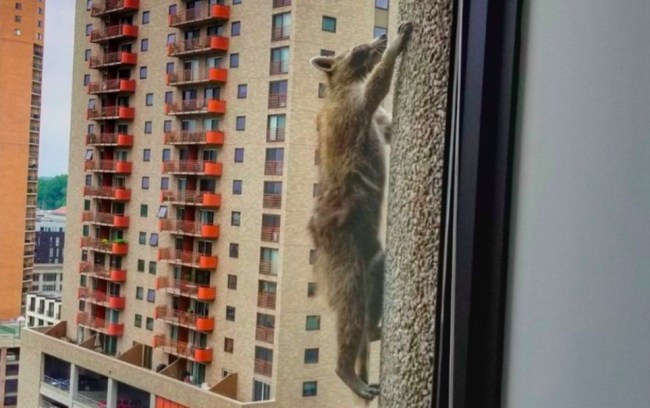 They say inspiration can come from anywhere. Today, I have been inspired to follow my dreams, at least until I get tired and give up, by a courageous raccoon from St. Paul, Minnesota.

At around 2:30 am, a live feed from the scene captured the creature scaling up and over the top of a 25-story building after maintenance workers removed the creature from the roof of another office in the area. After removal, the raccoon decided to scale the UBS tower — one of the tallest buildings in the city.

My picture from the 13th floor around noon. Hope he makes it down OK! #mprraccoon pic.twitter.com/gfVWysn9iO

THE GREATEST STORY EVER TOLD

Here it is, #MPRRaccoon’s valiant climb to the top of the UBS Center in Downtown St. Paul, this morning. @KARE11 @MPRnews pic.twitter.com/ot1DPNeRF5

What’s most impressive about the dude’s feat is that the building has no balconies or windows that open, so once  he went up, he had no lifelines.

Here’s a pic of the little guy stopping to take a nap on the ledge of the 23rd floor.

He is on the ledge on our floor. He seems to be doing well. We’ve been told that the building has live traps on the roof and are trying to get him to go up there. We all just have to keep our fingers crossed.. #mprraccoon pic.twitter.com/HY1PkuFKz0

The #mprraccoon is doing a little grooming now that he's a social media star. You know, on a 23rd floor window ledge. @MPRnews pic.twitter.com/pGcwh7OJ6L

The raccoon became famous overnight, even somehow creating a Twitter account on his trip up. Mistakes were made.

I made a big mistake. #mprraccoon

Workers at the UBS Plaza announced Wednesday morning that the raccoon had reached the roof overnight, grabbed some cat food left up there and found itself trapped in one of the cages that were set by Wildlife Management Services.

After a delicious meal of soft cat food, #mprraccoon has been caught and will be picked up by Wildlife Management. Goodbye friend! pic.twitter.com/twcBPpjOQk

Here is the #mprraccoon being picked up by technicians from Wildlife Management Services just now. Taken away by truck to an "undisclosed location." pic.twitter.com/x0iMZhW7zd

Tad Vezner of the St. Paul Pioneer Press reports that Wildlife Management Services are planning on releasing the animal in Minnesota’s rural areas.

“A staffer at the private firm said they were still arranging for a live release,” Vezner notes. “She added that the firm’s technicians live in the rural areas of Rogers and Zimmerman, Minn., beyond the northwest Twin Cities exurbs, and they would typically release it there.”