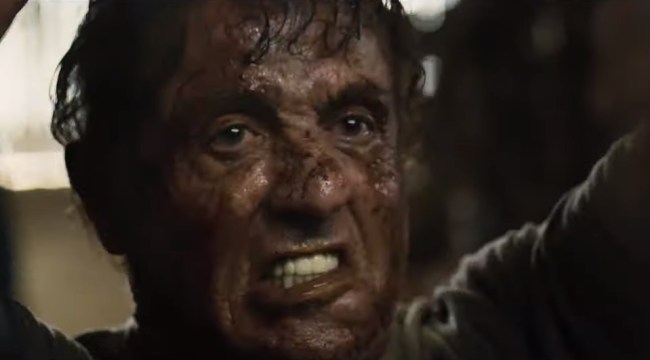 After drawing first blood, Rambo is finally drawing the last blood. The first trailer for Rambo 5 is here and it has major Home Alone vibes.

The first trailer for Rambo V: Last Blood and becomes the first movie to use the insanely catchy Old Town Road track by Lil Nas X in their soundtrack. This is the first Rambo movie since the 2008 reboot titled Rambo. This time Sylvester Stallone is back as John J. Rambo and this time he is ready to do battle on the Mexican border.

Rambo 5 looks to be as bloody as ever, despite Stallone turning 72-years-old next month. Armed with his trusty bow and arrow, John Rambo has set a trap for Mexican cartel members in his own home in Arizona after they kidnapped his friend’s granddaughter.

The body count is sky-high as one would expect from a Rambo flick. But this time John Rambo boobytraps his house à la Kevin McCallister in Home Alone, but instead of paint cans and Michael Jordan cardboard cutouts, Rambo uses lethal rakes and explosive-tipped arrows in Rambo: Lost In Arizona.

“In every film, Rambo never goes home, he goes out to the jungle or Afghanistan,” Stallone said in an interview with Deadline at the Cannes Film Festival. “In the new one, he does come home, but in a way he never arrives. He’s there, but he’s not. That’s what the whole story is built around. As soon as he walks outside his door, he has no more control. The world controls you.”