Rams LB Kenny Young Was Ejected For Hilariously Slapping An Official’s Hat, Which Is Just Not Allowed 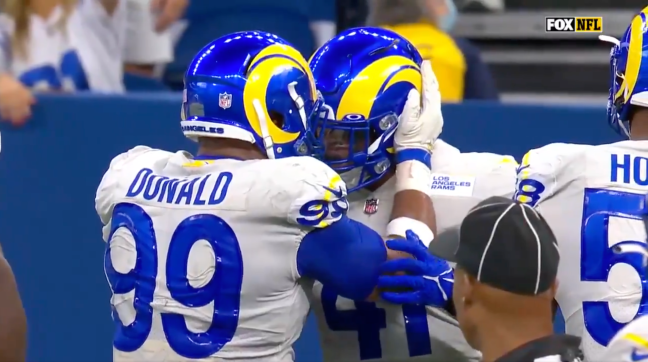 Rams linebacker Kenny Young will soon be hearing from Roger Goodell and the NFL. The fourth-year player out of UCLA took umbrage with an official and decided to take matters into his own hands…

… which is something that is simply not allowed. It is very against the rules.

In that moment, Young didn’t care.

The Indianapolis Colts were in the red zone and faced 1st-and-goal. Jonathan Taylor took the handoff up the middle for a small gain, but the play itself was not important.

After the play, Young was visibly upset with something that the referee either didn’t see or chose not to call. To express his frustration, Young slapped the official — very hard — on his hat.

Kenny Young was ejected for making contact with an official. Here´s the replay. #LARvsIND pic.twitter.com/isaRHltp4b

Again, making contact with an official is very much not allowed. Thus, he was ejected from the game.

Quite a few of his teammates, including Aaron Donald and Jalen Ramsey, spoke with Young after the bad penalty.

Aaron Donald had some words with teammate Kenny Young after a foolish penalty. pic.twitter.com/s8UQsAn06M

Though they likely would have anyway, the Colts were able to punch in for six on third down. The penalty didn’t make too much of a difference, except for the fact that Young was sent to the locker room.

No matter how frustrated he was, for Young to just straight-up slap a referee on his hat is incredible foolish, but it’s also hilarious. I have never seen it before and I can’t imagine that we will ever see it again, because it’s just so against the rules.

Just can’t be doing that.