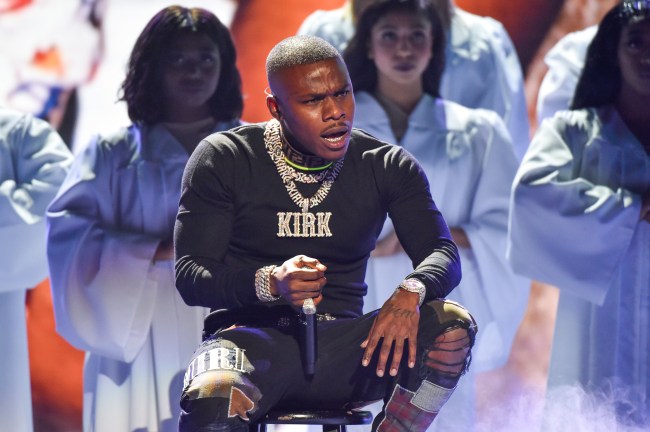 Rapper DaBaby has been blowing up for a few years now. His real name is Jonathan Lyndale Kirk but the Charlotte, N.C. rapper is known worldwide as DaBaby.

His most recent album, Baby on Baby, featured guest appearances from Offset, Rich Homie Quan, Rich the Kid, and others and it debuted at #25 on the Billboard 200 with his song ‘Suge’ hitting the Billboard 100 top 10 back in June.

He has a second album in the works titled Kirk that will feature guest appearances from Nicki Minaj, Gucci Mane, and other huge names in the industry. So, yeah, I think it’s safe to say that DaBaby is raking in the cash right now.

He was a guest on GQ YouTube‘s show where they bring on rappers and other artists to show off their jewelry collection and I have to admit that I’m shocked by how much ice this dude is wearing on any given day. Instead of putting his money in Gold he appears to have bought up all of the diamonds in the Southeast.

DaBaby has a $40,000+ Audemars Piguet watch, $20,000 Cuban link, $25,000 ‘Billion Dollar Baby’ charm, and more. Here I am packing for a trip this week and deciding if I should only wear my Apple Watch or if I should pack any other watches (worth less than $1,000) but this dude wakes up and decides if he should wear $50,000 in jewelry or throw on so many diamonds he probably weighs 10 more pounds on the scale.

Check it out. Heads up, you might want to turn up your volume or turn on the closed captions because he talks very softly throughout the clip.

I hate to admit this, my dudes, but I’m just not cut out for a life in the Rap game. I don’t think I could travel with that much jewelry and not have crippling anxiety about some of the diamonds falling out/getting dislodged from the jewelry, or pieces going missing along the way.

It also just seems heavy as hell. I’m living down in Florida these days and it was 88-degrees yesterday with the ‘feels like’ temperature at 99 degrees. I feel like I’d be sweating up a g’damn storm wearing pieces like this out in public.

Sure, the only place you might wear these in Florida is LIV or Club E11VEN in Miami but it’s still hot as hell at night. I’m not trying to show up to the club sweating my ass off and having my jewelry reflect the light so everyone can see the sweat pouring off my face.

I guess I’ll just have to give up my aspirations to be a successful rapper because I won’t be able to hack that lifestyle.