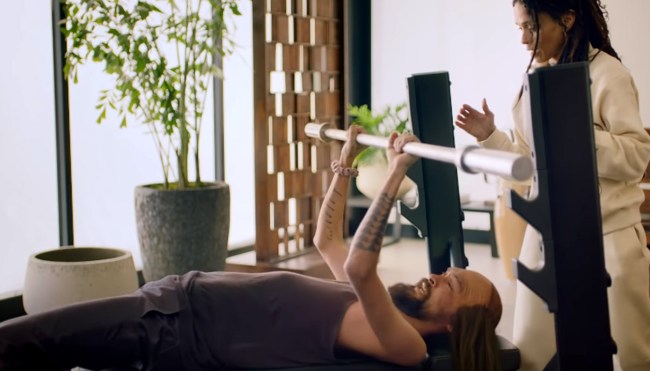 One thing you can certainly say about Super Bowl LIV, it wasn’t boring. From all of the great commercials to the mind-blowing halftime show with Shakira and Jennifer Lopez to the incredible game on the field, it was a very entertaining broadcast from beginning to end.

Perhaps the most disappointing commercial (which would have been received better he had not trolled everyone ahead of time) was Tom Brady’s Hulu spot where he says he isn’t going anywhere.

Hands down the most entertaining Super Bowl LIV commercial had to be the one featuring Aquaman star Jason Momoa (and his lovely wife Lisa Bonet) for Rocket Mortgage.

If you somehow missed it, the brilliantly creepy 60-second spot sees Momoa heading home after a hard day, talking about how much he really enjoys being at home. It’s his “sanctuary.” A place where he can let his guard down. Where “he can kick back and be totally comfortable in his own skin,” as he walks through his home losing his height, biceps, abs, and even his lustrous hair.

The commercial elicited some seriously comical reactions as many viewers were left gobsmacked and more than a little disturbed by Jason Momoa looking like a cracked out version of his normally fit and handsome self.

when Jason Mamoa took his hair off #SuperBowl pic.twitter.com/cmyu9toKMx

Lmao that jason momoa commerical got me fucked up 😂 #SuperBowl pic.twitter.com/4BR13NROA8

#SuperBowlLIV this was going to be my favorite commercial but they had to do this to Jason Momoa… and I can't watch this now y'all done ruined him for me 🤣🤣🤣🤣 pic.twitter.com/JZrwoDhVUh

Me after Jason momoa turned into a tinder nightmare in the @RocketLoans ad #SuperBowlLIV pic.twitter.com/k2OJgpwU5l

I hate Rocket Mortgage for making me see Jason Momoa that way! #SuperBowl

Jason Momoa tore his muscles and hair off and i'm terrified pic.twitter.com/6RfO4KmFm6

the Jason mamoa commercial made me uncomfortable 😭😂

I will never be able to unsee bald skinny Jason Momoa.