Someone Managed To Bring 20 Snakes On A Plane And Where’s Samuel L. Jackson When You Need Him? 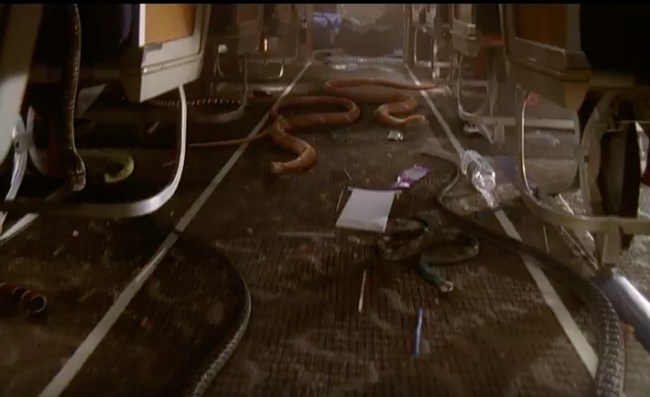 Over the years, SyFy has perfected the art of making movies with titles that tell you everything you need to know about a film, whether we’re talking about Big Ass Spider!, Mega Piranha, or the cinematic masterpiece that is Sharknado.

However, none of those even come close to Snakes on a Plane, a movie that contains one of the most iconic lines ever spoken on film courtesy of Samuel L. Jackson.

There was a ton of hype when Snakes on a Plane was first announced thanks to its stupid title, and while it wasn’t exactly a critical darling, it’s easily one of my favorite guilty pleasures thanks in no small part to a bathroom scene featuring one of my favorite onscreen deaths of all time.

Snakes on a Plane might not have been perfectly executed but it’s hard to deny the premise of being stuck in an enclosed space with a ton of venomous creatures at 30,000 feet is the thing nightmares are made of.

The worst part? It turns out the scenario isn’t even that farfetched.

Now, there’s another case of life imitating art thanks to a guy who thought it would be a good idea to smuggle 20 snakes in his carry-on during a recent flight between Germany and Russia.

Thankfully for everyone onboard, the snakes weren’t discovered until the man passed through customs after landing, and even if they had escaped, the only real threat they would have caused is giving every single passenger a heart attack.

The Russian agency who made the discovery issued a statement, saying:

“The reptiles were in canisters, packed in bags, carried in hand luggage. There were no documents provided for the reptiles. The species of snakes will be determined by specialists, but according to preliminary information they are not of a venomous species.”

That’s still going to be a “Nope” for me, dawg.