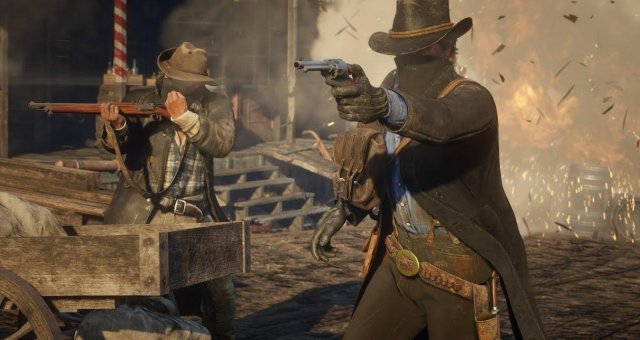 Things are going well for Rockstar Games. GTA 5 initially released on Xbox 360 and PlayStation 3, so that means that RDR2 has the largest launch for the current gaming consoles Xbox One and PlayStation 4. According to Sony Interactive Entertainment, the western open-world game set records for highest ever pre-orders, highest day one sales, and highest sales for the first three days on the PlayStation Network.

“Red Dead Redemption 2 contains 60 hours of incredibly detailed and interactive gameplay as well as the biggest open world ever seen in a game”
Me for 60 hours: pic.twitter.com/FXK8G7bsc7

But it isn’t just the otherworldly sales figures that are music to ears of Rockstar Games executives because Red Dead Redemption 2 is receiving perfect and near-perfect reviews. Red Dead earned a perfect 5 out of 5 score from GamesRadar, a score of 97 from Metacritic, a 9 out of 10 rating from GameSpot, a 10 out of 10 score as well as Editor’s Choice from IGN, a 9.6 score on IMDB, and a perfect score from GameInformer.

“There can be no doubt that this is a landmark game,” Keza McDonald wrote in her 5-star review on The Guardian. “It is a new high water-mark for lifelike video game worlds, certainly, but that world is also home to a narrative portrait of the wild west that is unexpectedly somber and not afraid to take its time.”

The Verge declared the game to be “the most convincing open-world game ever made.” Eurogamer noted that RDR2 is “a peerless open world” that featured “richness, detail and technical prowess that is breathtaking.”

“This game has heart; the kind of heart that is difficult to pin down but impossible to deny,” Kirk Hamiliton wrote in his review on Kotaku. “It is a wonderful story about terrible people, and a vivacious, tremendously sad tribute to nature itself. There is so much beauty and joy in this expensive, exhausting thing. Somehow that makes it even more perfect – a breathtaking eulogy for a ruined world, created by, about, and for a society that ruined it.”

People can not get enough of Arthur Morgan and the Van der Linde gang, just make sure to keep your trusty steed under control.