All Of The Best Jokes About ‘Red Notice’, Netflix’s Seemingly A.I. Created Blockbuster 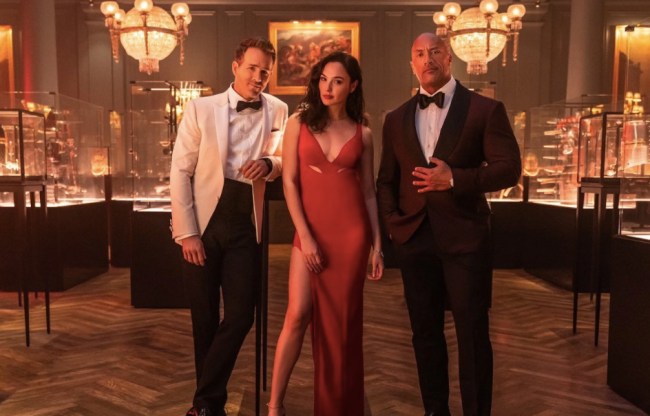 Have you ever seen those mock scripts on Twitter that claim to be a result of feeding thousands upon thousands of hours of dialogue into an artificial intelligence program? The ole “I forced a bot to watch over 1,000 hours of X movie/show and this is the script they came up with.” They’re actually quite funny, but also, fake: these scrips are not A.I.-generated are merely wildly clever jokes. Red Notice — Netflix’s massive $160 million blockbuster starring Dwayne Johnson, Ryan Reynolds, and Gal Gadot — feels like the real-world manifestation of that meme, as if someone forced a bot to watch every movie that The Rock and Ryan Reynolds have ever made and asked it to create an entirely new script based on its findings.

Despite this, star power economy is the name of the game in Hollywood these days and Red Notice certainly boasts that, which is likely what led to the movie having the “biggest opening day in Netflix film history,” according to… Netflix. To be fair, it’s not like I’m some film snob, as I also made myself some popcorn and fired it up on Friday night.

Following the film’s release on Friday, November 12, some movie fans took to Twitter to clown on the film and its lowest-common-denominator, slightly cynical construction.

Movies like #RedNotice are great because they remind me that I have what it takes to become a screenwriter.

You know something is iconic when the first time you hear about it is literally the corporate PR team telling you about it. https://t.co/603CU85BCF

We watched #RedNotice for the plot.

Oh I guess Red Notice is out now? I was really in the mood for a dumb action thing when I sat down for it but its script is just TOO aggressively stupid with plot holes the size of the pyramids contained in single lines of dialogue and ZERO chemistry between any people. Bad movie pic.twitter.com/28lHmREeFe

Watched Red Notice last night, I expected it to be quite bad. It surprised me: it's actually an abomination

Red Notice was bad. And then Ed Sheeran turned up. pic.twitter.com/GWfIszY6Fv

Red Notice is just so, so bad. Evidence that we all have produced subpar work during the pandemic.

Red Notice — which is currently touting two wildly different scores on Rotten Tomatoes (37% critic score but a 92% audience score) — is currently streaming on Netflix across the globe. Given that it’s Netflix’s “biggest ever opening day movie” (or so they say), it wouldn’t surprise me if a sequel is announced before the end of the week.