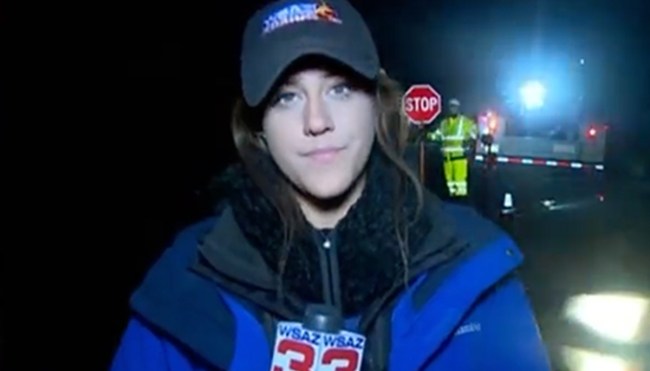 Being a local news reporter isn’t exactly the most glamorous profession in the world, as it’s a fairly thankless job that also comes with its fair share of risks—especially when you’re tasked with appearing on live television from the field.

As plenty of correspondents learned thanks to a profane viral trend that took the world by storm last decade, you never know when a report will be derailed by a rouge interviewee or passerby commandeering the microphone. However, that’s far from the only way things can go south.

Take, for example, this clip of a reporter in San Diego who somehow managed to keep his cool when a shootout broke out during what was supposed to be a routine recap of Comic-Con. While he luckily didn’t find himself in any real danger, the same can’t be said for a journalist in West Virginia who suddenly found herself becoming the main story while providing viewers with a weather update.

On Wednesday night, WSAZ‘s Tori Yorgey was chatting with an anchor about inclement winter weather in the vicinity of the state’s capital. While the roads were apparently in pretty good condition, a driver passing by the scene was still able to strike her shortly after she kicked off her report.

Wow, this reporter gets hit by a car, and rebounds to finish the live shot! 😂 pic.twitter.com/dbwKt5N1xc

Thankfully, Yorgey (who revealed she’d also been struck by a car when she was in college) was unharmed and quickly managed to bounce back, as she assured the driver (and viewers) that she was fine before picking up right where she left off.

That, my friends, is the mark of a consummate professional.