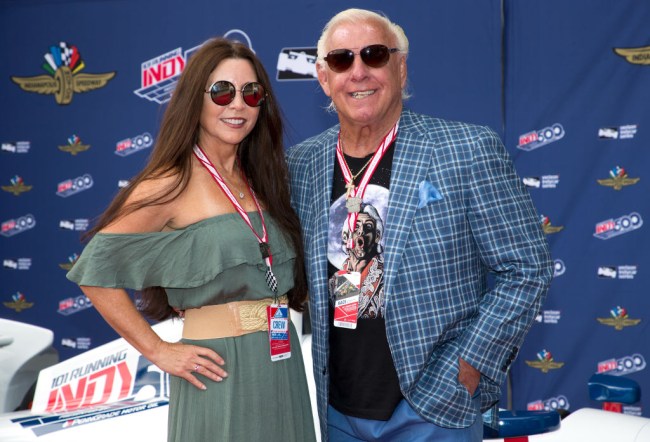 In any event, the wrestling legend married his girlfriend of nearly six years and former WCW manager, Wendy Barlow, at the Pearl Hotel resort in Rosemary Beach, Florida yesterday. My colleague and friend Doug did a nice little roundup of the wedding last night, including Flair rolling down the aisle of his fifth wedding to ‘Ric Flair Drip.’

Hey check out this photo of The Nature Boy doing his best impression of John Coffee from The Green Mile. Jesus bro, how does her small intestine taste. BAH GAHD!

Ric Flair had some special guests as he married for the fifth timehttps://t.co/vQacYNcaiv pic.twitter.com/2jVA5VuBA5

I’m not sure I’ve ever been happier for someone I didn’t know, especially someone whose tied the knot more than an Eagle Scout. But, there’s something honorable about never being able to pin The Nature Boy down, both literally and figuratively. Just last August, Flair was in a medically-induced coma after his intestine had bursted open after a night of drinking.

I have faith that the 16-time world champion’s health scare put things in perspective for him and he and Wendy can live happily ever after.

But if not, their relationship was worth it simply for this photo:

There needs to be a 30 for 30 solely about Ric Flair’s wedding and this photo needs to be memorialized in a museum and on my tombstone.

What I would have paid to be a fly on the wall for this conversation.

Rodman: [mumbles for eight minutes] DO YOU KNOW WHAT KENNETH BAE DID?

[grabs Rodman by the neck and chokeslams him on the alter]

[Jim Ross pops out of the cake]: OH BAH GAHD!

Also, wedding MVP goes to Michael Hayes, who looks like a pimp before bedazzled iPhone cases.

All of the Ric Flair wedding pictures are amazing, but Michael PS Hayes has the wedding fit of the damn century. pic.twitter.com/eseSukt4oy

There’d be no place I would have wanted to be last night than that wedding.