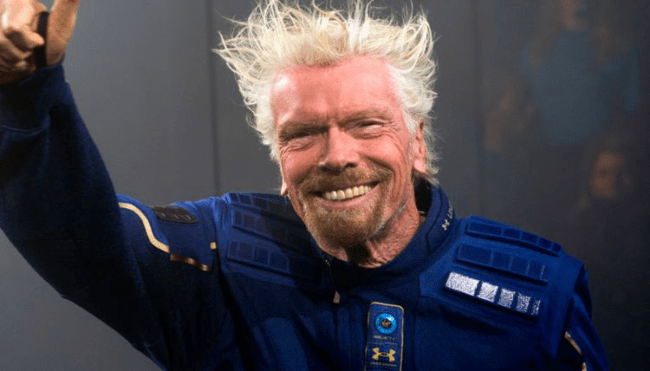 In 1962, John F. Kennedy delivered a speech in Houston where he outlined the plan to make the United States the first country to send someone to the surface of the Moon. During the address, he preemptively addressed critics of a quest that was partially motivated by the need to stick it to the Soviet Union by asserting the trip would be a testament to American exceptionalism, saying the difficulty of the achievement is what made it such a particularly noble pursuit.

Seven years later, Neil Armstrong and Buzz Aldrin put the Russians on a celestial poster when they planted the Stars and Stripes on the surface of the Moon and effectively ended the Space Race in the process—one that set the American government back a total of $25.4 billion by the time the Apollo project officially wrapped up in 1973.

That number rises to around $152 billion when adjusted for inflation, which is around $45 billion less than Jeff Bezos is worth at the time of this writing. In recent years, the Amazon founder had decided to use some of his unfathomable fortune to building a $42 million clock inside of a mountain, purchasing a yacht that needs its own “support yacht,” and, of course, attempting to realize his childhood dream of traveling to outer space.

Last month, Bezos announced his plans to finally realize that goal by strapping into a Blue Origin rocket on July 20th. Shortly after, reports surfaced that Richard Branson was scrambling to blow up the spot of his fellow billionaire by preempting him with a trip aboard a Virgin Galactic spacecraft, and now, he’s officially announced that’s exactly what he’s going to do.

According to Gizmodo, Branson will embark on the Unity 22 mission from a launch site in New Mexico on July 11th. While he’s only worth a paltry $5.8 billion, that sum is still enough to secure the title of “The First Billionaire To Go To Space” assuming everything goes as planned.

However, there’s still one very pressing question that remains unanswered: Why should anyone care?

It’s been over 50 years since the first Moon landing, and since then, more than 550 people have traveled to outer space. Sure, it’s a fairly exclusive club, but by now, the novelty has largely worn off; there’s a reason fairly routine trips to the International Space Station aren’t generating the same amount of coverage of a Space Race between billionaires.

Am I jealous of Branson and Bezos? Ab-so-lutely; the Haterade is pumping through my veins at a blistering rate. With that said, what are they really achieving here? I’m not trying to discount the amount of effort (and money) that went into making their trips possible, but space travel has come a long way since JFK spoke at Rice University that afternoon; it’s certainly not “easy,” but I don’t think using the absurd amount of money at your disposal to hire a bunch of smart people to figure out how to get you into orbit is particularly “hard.”

I mean, good for them, but I don’t really get how this is good for anyone but them.