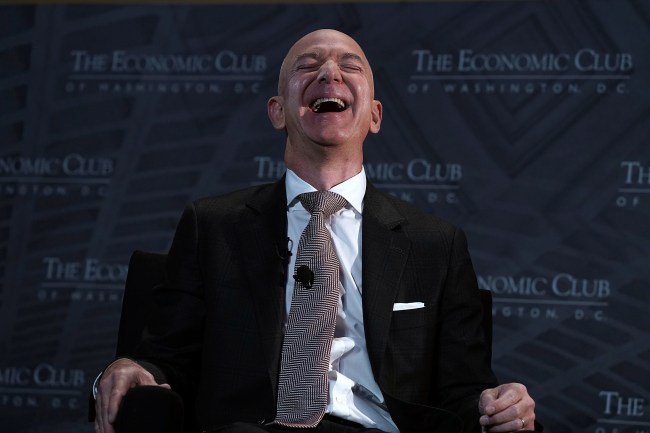 Jeff Bezos’ bank account now has more zeros than a LARPing convention, as it’s being reported by Forbes that Amazon’s head honcho has become the first EVER $200 billion man.

Amazon’s stock perked up 2% as of Wednesday afternoon fueled by the change in consumer habits as a result of the coronavirus pandemic, and in turn, bumped Bezos’ net worth up by $4.9 billion.

As it stands today, the 56-year-old is worth a record $204.6 billion, almost $90 billion more than the world’s second-richest person, Bill Gates (currently worth $116.1 billion), and double that of newly-minted centibillionaire Elon Musk.

Two hundred billion is nearly impossible to contextualized, so think of it like this:

the other day i saw a thing that said “if you saved $10,000 a day since the pyramids were built in 2540 B.C. you would still only have one fifth of jeff bezos’ net worth” and my soul has felt restless ever since

Bezos could give ever American $609, and every person on the planet $26.

Bezos’ cartoonish net worth has garnered some expected criticism from those who believe the disparity in this country is too stark.

Yet 30 million Americans report that their households didn't have enough food in the past week.

American capitalism is off the rails.

Jeff Bezos has added $87 billion to his fortune this year

All 400,000 Amazon warehouse workers will make $13 billion combined this year

This year, Amazon took away $2/hour hazard pay for those workers & declined to provide paid sick leave in a pandemichttps://t.co/vCtqEFIyr3

While 92 million can't afford health care, the 4 richest Americans are now worth $512.8 billion:

It's time to tax the billionaire class and expand Medicare to all.

This is a picture of Jeff Bezos when started Amazon.

He just became the first person with a net worth of $200 billion.

It doesn’t matter where you start.

You can accomplish anything. pic.twitter.com/vdMc3ebQ9g

Jeff Bezos is now worth $200 billion that's equivalent to about R3.4 trillion.

His net worth is almost equal to South Africa's economy.

Jeff Bezos is now worth 3x the entire Department of Education budget.