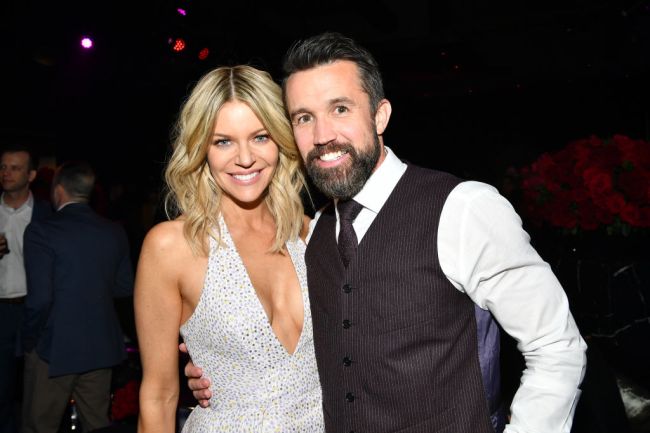 "If you get so wrapped up in why you made a mistake and then you turn to somebody to look for some level of validation, you’re looking in the wrong direction. The only way to look is inward." – @RMcElhenney https://t.co/IiK6NixlRW pic.twitter.com/igxUAs9lB4

“I’m sure you’ve experienced this, too, but the people who were most fascinated by my body when I was in great shape were dudes,” McElhenney told Reynolds in a piece for Men’s Health. “Women could give two sh*ts. In fact, my wife really was displeased with the way I looked, because she felt like I was trying too hard, and I was. I was!”

Since women don’t care about men who are shredded, guess I won’t waste my time going to the gym and continue my diet of a dozen Krispy Kreme glazed donuts and wash it down with a six-pack of Yuengling.

“There’s this fascination that men want to look like that and men want to be that aesthetically pleasing to other men,” the It’s Always Sunny in Philadelphia star said. “I’m actually talking about straight men as much as men in the gay community.”

“It’s interesting that it’s not based in sexuality or sex appeal and more about this body image that we’ve sort of grown accustomed to,” the actor explained. “It’s the thing people find fascinating, because it relates to their lives. So much of it is wrapped up in health, but also aesthetics and sex and all sorts of things that make us human, and it’s something we’re all grappling with in different ways every day.”

He is far from fat Mac.

Sorry wrong one. I forgot they chose the other one. pic.twitter.com/OE3yRQfYhB

The 44-year-old comedic actor, who is married to IASIP costar Kaitlin Olson, added, “However, I will say — and I hear this from a lot of men, and I think it’s a little bit less taboo to talk about — that men, too, are held to a standard of masculinity that’s impossible to live up to or is probably essentially unethical to live up to: that sort of quiet, masculine tough guy who’s both jacked and ready to throw down at any moment but also sensitive — but not too sensitive.”

McElhenney, who is also working on the Apple TV+ series Mythic Quest, told Reynolds, “And aesthetically, the superhero stuff hasn’t helped. We now have this ideal of being the biggest dude or the most ripped guy in the room.”

“Get the personal trainer from Magic Mike, sleep nine hours a night, run three miles a day, and have a studio pay for the whole thing over a six- to seven-month span,” he joked. ” I don’t know why everyone’s not doing this. It’s a super-realistic lifestyle and an appropriate body image to compare oneself to Hollywood.”

“I consider myself a very disciplined person. I eat really clean. I work out hard. I go to work really hard,” McElhenney said. “I spend a lot of time with my family. I take my kids to school every day. I try to stay as regimented as possible. But if I don’t have whatever that thing is for people—that cookie, that pizza, or that manhattan I like to drink every single night—I will be miserable. And I know that about myself. So that’s actually a sustainable lifestyle for me.”

🚨 You heard it here first 🚨: @RMcElhenney is challenging @DannyDeVito (not @markwahlberg nor @VancityReynolds nor @RyanGosling) to lift 340 pounds.

Last year, Reynolds and McElhenney promoted the National League soccer club Wrexham, and read an ad for the football club.