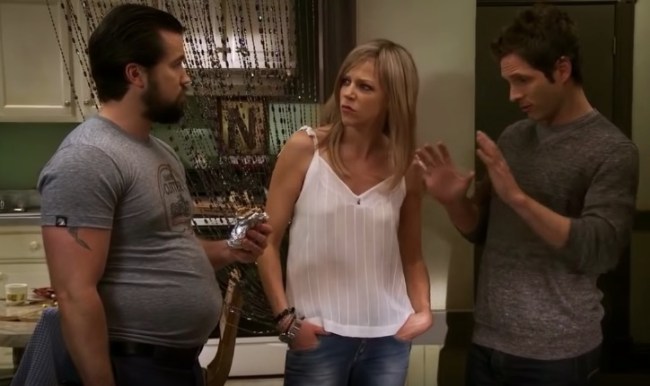 It was in the editing room ahead of the 2011 It’s Always Sunny In Philadelphia season when Rob McElhenney had the epiphany that he should gain a ton of weight because his character is a gross human being, they’re all gross, and they should be aging in accordance with that. So Rob threw out the idea of gaining 50 pounds for the show.

Fat Mac was born. Only it was 60 pounds instead of 50 that he gained. Good god was he fat. These days he’s shredded again so it’s easy to forget the glory of Fat Mac but he ballooned from 160 pounds to 220 pounds in only 3 months and then they rolled him out on the show. Even his co-stars were worried about this weight gain. Charlie Day said “It’s been disgusting to watch him go through with this adventure. We were a little on the fence about it for his own personal health and safety, but it has definitely made Mac a lot funnier.”

Let’s just take a quick look back at what Mac looked like after gaining 60 pounds in three months:

Rob McElhenney was a recent guest on the Armchair Expert podcast with Dax Shepard where he discussed the steps he took to gain 60 pounds in three months. After consulting a nutritionist, he initially tried to gain the weight by eating healthily with dishes full of chicken and rice. Obviously, that didn’t work. So he embraced his inner Fat Mac according to UPROXX:

“So, I said let’s start doing that [eating two Big Macs a day]. So, then I had Krispy Kreme donuts. Every morning, I would have four of those … and by the afternoon, I was drinking ice cream. I would take ice cream, and I would put it out on the counter in the morning and it would melt and I would put weight gainer in it, and I would drink [melted ice cream] in the afternoon. I was also drinking [wine] heavily.”

“But this was the key,” McElhenney added. “I read that cottage cheese metabolizes really slow in your stomach, so if you eat cottage cheese, the last thing you want to do is eat it right before you go to bed because it metabolizes so slowly. So, that’s what I decided I had to do. So, I started eating cottage cheese in the middle of the night. I would wake up at 2 a.m. and I would eat cottage cheese. One week after that, I came in on a Monday and for whatever reason, it was like I popped … I went from 160 to 220.” (via)

One problem he had with this method is that all of the weight he was gaining went straight into his gut, disproportionately so. To fix this, Mac started powerlifting in order to spread the weight around his body which also played perfectly for his character on the show.

As for the long-term health effects of gaining all that weight, his blood pressure and blood sugar were fine. But he says he suffered a ‘fatty liver’ which eventually went away after he kicked the alcohol. Losing the weight wasn’t a problem for Rob/Mac. As soon as he stopped drinking several thousand calories worth of ice cream each day and maintaining the same level of exercise the weight peeled off.

Look, it’s not that hard. All you need to do is lift weights six days a week, stop drinking alcohol, don’t eat anything after 7pm, don’t eat any carbs or sugar at all, in fact just don’t eat anything you like, get the personal trainer from Magic Mike, sleep nine hours a night, run three miles a day, and have a studio pay for the whole thing over a six to seven month span. I don’t know why everyone’s not doing this. It’s a super realistic lifestyle and an appropriate body image to compare oneself to. #hollywood

These days, Rob is shredded. He’s looking damn good for a guy his age. He recently shared his secret to getting so fit in a post on Instagram which you can check out here.