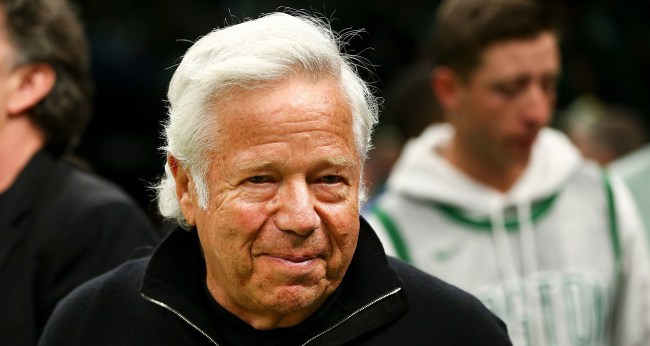 We are now almost two months into the story surrounding Robert Kraft’s alleged involvement with the Orchids of Asia Day Spa in Jupiter, Fla. and the prostitution charges facing him.

And with ESPN and other publications actively attempting to force the court to release the prostitution video of Kraft, the story is far from being completed.

This past Friday during a hearing at the Palm Beach County Courthouse, Judge Leonard Hanser asked all parties to submit proposed orders over whether surveillance video will be released or not by Tuesday, reports CNN.

But Kraft’s legal team said the video was “basically pornography” and is asking a judge to prevent the videos’ release to the news media, in part because the footage’s release would violate Kraft’s right to privacy.

The defense also argued that the court should prevent the videos’ public release at least until it rules on Kraft’s argument that the footage was illegally obtained and therefore should be kept from trial. That ruling is expected later this month.

The media coalition’s attorneys argued that the public has a right to obtain the video and that Kraft does not enjoy the right to privacy as a criminal defendant in a criminal case.

Based on court records obtained by The Smoking Gun, pertaining to Kraft’s visits to the Orchids of Asia Day Spa, it sounds like his attorney is right on at least one count.

During the January 19 visit, Kraft had his genitals manipulated by two female workers, one of whom subsequently “can be seen wiping Kraft’s penis with a white towel.” Investigators confirmed Kraft’s identity after he departed the spa in a chauffeur-driven white Bentley that officers pulled over during a traffic stop ruse.

The following morning, Kraft arrived at the spa in a 2015 blue Bentley. While inside a massage room, a female employee was recorded “manipulating Kraft’s penis and testicles.” She “then put her head down by his penis. This went on for several minutes.” The woman later “wiped Kraft in the area of his genitals with a white towel.”

On a related note, CNN also reports that Kraft’s attorneys have also asked the judge to keep the video out of the trial. They claim that law enforcement provided false information in the affidavit to obtain a warrant for the sting, making the video evidence inadmissible. A hearing on that issue will be held on April 26th.

If the media is allowed to air the video now, but the court eventually rules the footage is inadmissible and the case still goes to trial, many potential jurors will have seen the video and will be tainted by evidence they weren’t supposed to consider, [Kraft’s attorney William] Burck argued.

“The irreparable harm to Mr. Kraft (if it’s released before a judge can rule on its admissibility at trial) … will be absolutely catastrophic, whereas the public’s interest in seeing this video is all about prurient interest,” Burck said.

According to Diana Moskovitz of Deadspin who witnessed the court hearing, what Burck is asking is akin to challenging the very constitution of the state of Florida.

Throughout the proceedings, Burck repeated to Palm Beach County Judge Leonard Hanser that he didn’t want to argue whether the state’s public records law is unconstitutional. But at several points, he sure sounded like he did: “It’s a shocking thing to hear the press take the position that the federal right to privacy … gives way to a Florida state statute about public records,” he said.

And later: “The media seems intent on putting the Florida statutes in conflict with the U.S. Supreme Court and the federal Constitution.”

During the court hearing, which lasted more than three hours, I didn’t hear the lawyers cite a single piece of Florida case law. Most of the time was occupied by Burck citing the Fourth Amendment and how its right to avoid unreasonable search and seizure means this particular piece of police evidence isn’t a public record.

But he didn’t call it police evidence (which it is)—he called it pornography. Burck used the phrase “prurient interests” over and over, insisting the media wants the video simply for clicks (which is no surprise given how many times the same point has come up in Kraft’s teams legal briefs).

As for how the media’s lawyers felt about Kraft’s attorney’s pleas to the court, one told the judge, “He has presented no evidence whatsoever, other than an argument that everybody will find out and everybody will get to see.”

Which, unless Kraft and his attorneys somehow get their way, like it or not, is exactly what is going to happen.