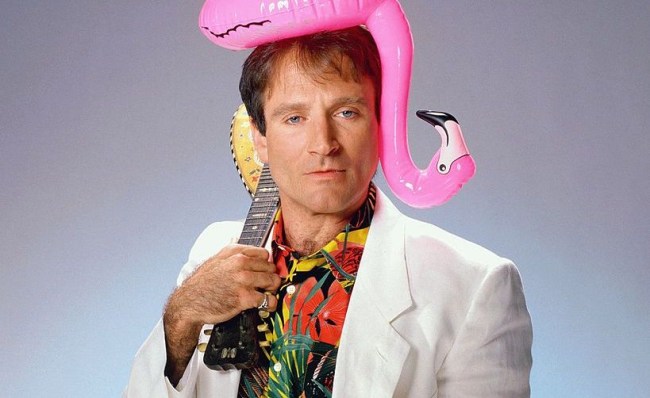 As I’ve written about on this website before, Williams’ suicide affected me far deeper than any other celebrity death in my lifetime, as the beloved comedian was such a father figure to kids like myself who were growing up in the 90s.

From Mrs. Doubtfire to Jumanji, from Hook to Good Will Hunting and so on, there was just something so inherently fatherly about Williams: you could just tell that — even though he was not only an adult but seemingly an adult from another planet —  he understood what it was like to be a child. He knew how to relate and how to make the ever-growing world seem smaller. When it comes to actors who shaped my childhood, there’s Robin Williams and then everyone else.

As is the case every year when his birthday or death anniversary rolls around, the world is celebrating Williams’ memory by telling stories and sharing clips from his multi-decade-long career. And this year, given that the upcoming election in on the forefront of most Americans’ minds, the internet found a hilarious Williams bit about Democratic nominee Joe Biden from all the way back in 2009.

Unsurprisingly, Eric Trump — the “god damn it, not again” son of the Trump family — tried to hop in on the fun by sharing the video on Twitter, only to have Williams’ daughter Zelda reign hellfire from the top rope, reminding Eric of what Robin used to say about his father.

“While we’re ‘reminiscing’ (to further your political agenda), you should look up what he said about your Dad. I did. Promise you, it’s much more ‘savage’. Gentle reminder that the dead can’t vote, but the living can,” Zelda tweeted.

As for the clips, one of the jokes is from a stand-up performance in 2012 while the other is during an interview on The Late Late Show with Craig Ferguson (the Trump joke during the Ferguson segment can be found around the 13:00 minute mark, but I’d recommend watching the whole thing).

Rest in peace, Robin — we still miss you and always will.

On this day in 2014, the world lost the legendary Robin Williams.

This one still hurts. Rest in Peace to one of the all-time greats. pic.twitter.com/VrPfFuvveL