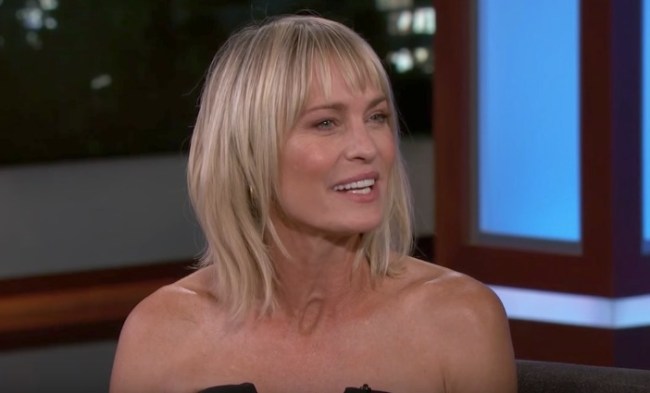 It’s hard to believe that The Princess Bride is turning 30 years old because it was a movie I watched countless times as a kid and it feels like just yesterday. The female lead of that film was played by Robin Wright, who has lately been known for her starring role on Netflix’s House of Cards.

Robin was a guest on Jimmy Kimmel Live last night where she shared an awesome story about meeting André the Giant. When Robin first came upon André the Giant on the film’s set she screamed and ran, literally. I can’t fathom ever seeing/meeting someone and freaking out so hard I took off running but I’ve also never met anyone as physically imposing as André the Giant.

Robin Wright talked about how scared she was meeting André the Giant for the first time but quickly shifted to discussing how he was one of the kindest people she ever knew. She shared an anecdote about how André used his gargantuan hands to help her warm up and the juxtaposition of size sounds like a fully grown adult warming up a newborn baby. André the Giant was truly larger than life in every sense of that phrase, and it’s excellent news to hear that a documentary will soon be coming out about him.