This $25,000 Robot Barista In San Francisco Can Serve 400 People A Day And Is Starbucks’ Worst Nightmare 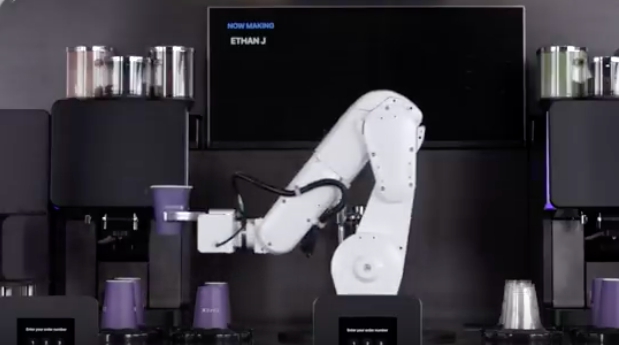 In the next life, I want to be reincarnated into a piece of scrap metal in the off chance I get used to create a robot. I’m confident by then, robots will take our jobs and our wives and we’ll be on the wrong end of the leash.

The latest indication of a robot takeover comes in the form of a robot barista that can produce 120 drinks an hour. The maker of the $25,000 robot dubbed Cafe X Technologies is designed by the team behind Dr. Dre’s Beats headphones, the Ammunition Group.

The robot works using a six-axis animatronic arm that can deliver any drink you’re neighborhood hipster barista can. Cafe X operates as a sole barista in a San Francisco cafe, where customers place orders on a kiosk touchscreen or via the Cafe X app and receive a text when the drink is ready, CNBC reports.

The enticing part of the robot is that coffee prices are low seeing as there is very little overhead, with a cup of Americano coffee being $3 with no need to tip.

Humans aren’t completely cut out of the operation–an actual human refills coffee beans and milk and cleans the unit at least once a day. A product specialist is also available in the coffee to help with product offerings.

The inventor of the machine is 24-year-old Henry Hu, who thought up the idea in his second year at Babson College after being stuck in a coffee line for too long at an airport.

The baristas to me looked like factory workers,” he said. “They were moving cups around and pushing buttons, which made me think, ‘I bet we can build a product that automates these boring tasks way more efficiently.”

Hu claims that he doesn’t think robots will rise up to kill us.

“I don’t see the robot revolution as a problem,” he said. “The idea isn’t to scare you or harm you in any way. The point is to get you your coffee as quickly and deliciously as possible.”

Sure dude, whatever you say.