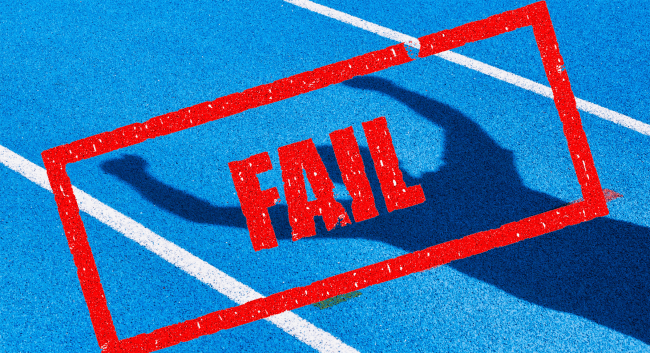 As former Dallas Cowboys defensive tackle Leon Lett infamously proved back in January 1993 at Super Bowl XXVII, you should never celebrate anything prematurely.

This is a lesson triathlete Matteo Bustos apparently wasn’t taught as he handed the win in the Sagunto Triathlon in Valencia last Sunday to another competitor by celebrating just a few feet too soon.

In video taken by a spectator at the triathlon finish line, Bustos is seen coasting and pumping his fist as he approaches the tape.

Little did he know, apparently, his competitor Germán Cister was still going full bore towards the finish line, passing Bustos mere feet from the finish line for the victory.

Fans watching his showboating shouted at him, calling him an idiot (idiota) and a fool (tonto) in Spanish.

Making matters somehow even worse for Bustos, the specator’s video has now been viewed over 2.7 million times on Twitter.

Commenters on Twitter expressed sadness and empathy for Matteo Bustos’ mistake at the Sagunto Triathlon.

Just kidding! They roasted him.

“Oh no! …gotta run thru the finish line bro,” one person commented.

“He’s not going to leave home for a month,” joked another.

“Same vibes as me failing a subject because I was lazy,” wrote another viewer.

“Typical of today, the posture, look cool in the video. Until you have beaten your rivals there is nothing to celebrate,” said another commenter.

Finish the race, ~then~ celebrate. A hard lesson to learn; hope he takes it in stride. https://t.co/EOd1cLtNk0

After the race, and his epic fail, Bustos took to Instagram and tried to downplay his finish line mistake.

“Long trip, change of hemisphere and climate,” he wrote. “Suffering from start to finish, but enjoying as it should be.”

“Someone forgot to finish,” replied one commenter who obviously wasn’t going to let him forget.

“I could say so many things about what happened in the Sagunto triathlon, but it is better to stay with the positive things that this left me. I trusted myself, the emotion of being 3 meters from the goal played a trick on me. Emotions cross, at that moment I felt the fruits of so much effort and sacrifice in each training session, I thought of my old man on Father’s Day, and of my grandfather who had his birthday.

“He won when he crossed the line and that’s what’s cool, the competition.

“Thanks to those who gave me their encouragement, also to those who made me go viral, because I learned and showed me those who are always with me. Today more than ever convinced that this sport gives friends and satisfaction.”