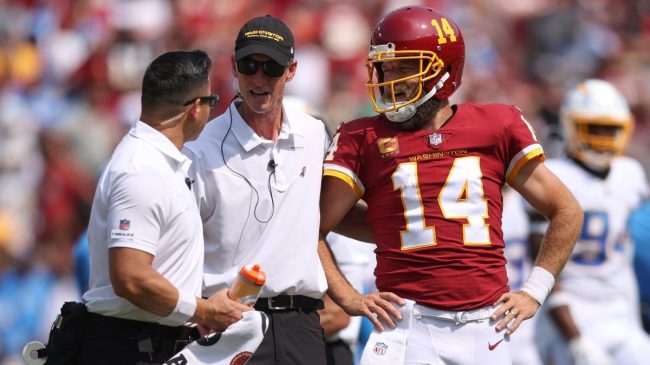 Ryan Fitzpatrick’s 17-year NFL career is one most NFL fans will not soon forget.

The Harvard product was the 250th pick in the seventh round of the 2005 NFL Draft by the St. Louis Rams. He then proceeded to start for a record nine-different NFL teams. Fitzpatrick is also the only player in NFL history to have a passing and rushing touchdown with eight different teams.

The journeyman quarterback retired following the 2021 NFL season. But the circumstances around his retirement may be weirder than anyone knew.

Fitzpatrick began the 2021 season as the starting quarterback for the Washington Commanders after signing a one-year deal. But the veteran signal-caller didn’t last all that long in Washington.

He suffered a hip subluxation in an opening-week loss to the Los Angeles Chargers. Fitzpatrick was then put on injured reserve and retired following the season.

But some rumors suggest Fitzpatrick suffered the injury in a more ridiculous fashion.

One local radio caller claimed that he saw the quarterback injure his hip while at a waterpark with his family just prior to the season.

Here is a caller to @1067theFan suggesting that Ryan Fitzpatrick injured his hip on a waterslide earlier in the week. pic.twitter.com/JFxVnwfN1s

Fast forward a year and Le Batard had Fitzpatrick on his show to discuss a variety of topics. One of the topics, which co-host Jon Weiner (Stugotz) initially brought up, was the waterslide incident. That did not sit well with Fitzpatrick.

Hard hitting journalist @Stugotz790 asked Ryan Fitzpatrick about the rumor that came from a Washington, DC sports radio caller who alleged Fitzpatrick injured his hip on a waterslide….and immediately offended him. Oh no.

Le Batard, who for some reason was dressed as WWE wrestler Kane, tries to follow up. Instead, he gets nothing but silence from Fitzpatrick, who quickly hustles the interview along.

The lack of firm denial sure doesn’t look good for Fitzpatrick. Though many listeners suggested there may be financial ramifications if Fitzpatrick is found to have injured himself off the field.

It’s not a great look for Fitzpatrick either way.