Scooter Braun Makes Public Plea To Taylor Swift, Who Unleashed Her Fans On Him, After His Family Receives Death Threats 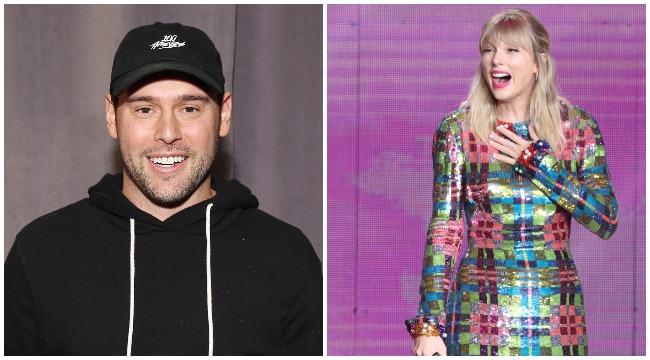 Can you imagine the shitstorm that would show up on your doorstep if Taylor Swift asked her 123 million social media followers for their help in un-gripping her from your, as she puts it, “tyrannical control?”

Swift played dirty last week when she took to social media to claim that music industry executives Scott Borchetta and Scooter Braun are blocking her from performing her old songs on TV at the 2019 American Music Awards this Sunday, when she is slated to the Artist of the Decade Award.

In a post entitled “Don’t know what else to do,” Swift said that Borchetta and Braun are forbidding her from performing her old songs on television because “they claim that would be re-recording my music before I’m allowed to next year.” She also claimed that the executives are declining the use of her older music or performance footage for a Netflix documentary about her life that’s currently in the works.

Don’t know what else to do pic.twitter.com/1uBrXwviTS

Here’s where it gets dicey. Swift implores her fanatical followers to, “Please let Scott Borchetta and Scooter Braun know how you feel about this,” before accusing them of “exercising tyrannical control.” Swift should know better than incite an angry mob.

At the end of the post, Swift acts like she’s outing them to be transparent with her fans: “I love you guys and I thought you should know what’s been going on.”

Braun, Big Machine Record Label executive and founder of media company SB Projects, recently broke his silence about the accusation about the beef in a Q&A at the 2019 Entertainment Industry Conference on Thursday.

Braun has since participated, posting a public message to his 3.2 million Instagram followers with a caption that simply features Taylor Swift’s IG handle.

Braun makes a plea to Swift to try to help extinguish these threats, threats he claimed his attorneys informed her of four days ago and were ignored.

“Since your public statement last week there have been numerous death threats directed at my family,” the post read. ”…I came home tonight to find my wife had received a phone call threatening the safety of our children as well as other threats seen above.”

Braun also posted a screenshot of a particularly aggressive and illiterate message that reads: “Hi, why dont you just die with your children??? I will buy a gun tmr and them shoot you all in the head.”

The executive also publicly stated that she “can and should perform any song you would like at the AMAs” before saying that people have told him a private meeting is not in the cards because “this is not about truth or resolution but about a narrative for you.”

Swift has yet to respond publicly.