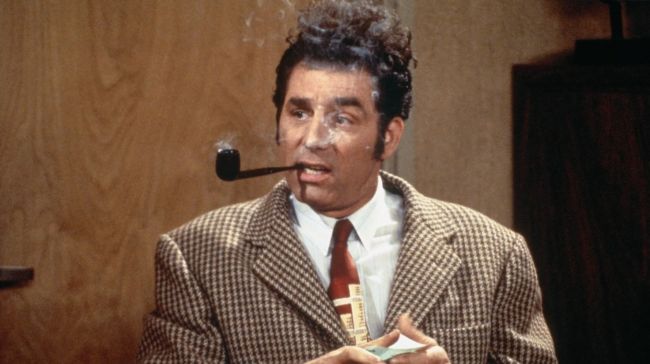 Perhaps more than any other iconic sitcom, the idea of Seinfeld characters having to live in today’s world is a uniquely tantalizing proposition, as this is a group of people famed for their narcissism, which is a character flaw that would likely only be heightened by the society and culture of 2021. Hell, there’s an entire social media brand based on that idea, @Seinfeld2000. Picture Elaine and Jerry on Tinder, complaining about the fact that they aren’t famous enough to use the celebrity dating apps. George losing his rent money on a legal gambling app. And Kramer… well, Kramer is another story entirely.

The core characteristic of Kramer was inherent chaos, which also just so happens to be the internet’s primary trait. Kramer would be a Reddit guy, a 4Chan guy, a Silk Road guy. He’d operate on the fringes and in the margins. And according to Seinfeld writer Larry Charles, he’d hilariously be part of both QAnon and Antifa.

“When I thought about how ′Seinfeld’ would survive in this kind of environment and this television environment, and I look around, I think about bringing those characters to the 21st century, and … wouldn’t Kramer be … a believer in QAnon? But he might also be in antifa at the same time to cover his bets,” Charles told The Daily Beast.

As an avid Seinfeld fan — I used to own the entire series on DVD — I find this rationale from Charles to be absolutely perfect. I can literally picture Kramer explaining it to Jerry at the Shake Shack that’s taken over where the old diner used to be:

“I’m playing both sides of the coin here, Jer. You can’t lose when you can’t win, either. I’m friends with everyone. But also… no one.”

Charles’ analysis of the rest of Jerry’s gang certainly wasn’t any kinder, as he theorized Elaine’s been in and out of rehab, while George — and this is a doozy — might’ve killed himself by now. He did not, however, give his thoughts on the present-day life of Seinfeld himself (smart move).

“Elaine might’ve been married a couple of times, she’s probably developed a pill habit of some sort, she’s been in and out of rehab,” Charles said. “And George might have committed suicide by now, quite frankly.”

Still, despite Charles’ harsh prediction for everyone’s favorite 90’s New Yorkers (that’s right, shots fired directly at Friends), I’d still love to see a modern update of the series, even if it was just for one episode. Just to see what everyone’s up to.