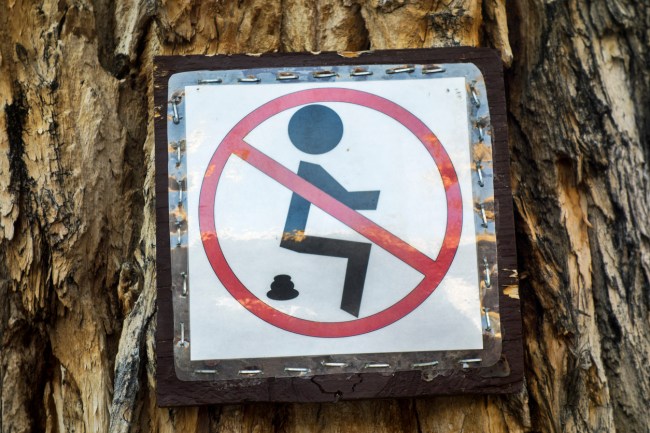 In the age of the internet, stories that leave me completely dumbfounded are few and far between.

However, this story about a recently apprehended serial pooper had me completely befuddled and even more so when I learned that this is part of a greater epidemic sweeping the bowels of the nation.

Jeffery Churchwell, a 60-year-old English teacher in Wisconsin, was cited for disorderly conduct and fined $365 (with an additional $5,705 in restitution) following a two-year pooping spree in Wisconsin’s Natureland Park.

The details of his deeds are almost unbelievable. Over the course of those two years, the then-unknown mystery dookier was striking the same building in Naturland Park as many as five days a week and sometimes multiple times per day.

To make things even crazier, the deed was apparently done on the building.

Perhaps I’m naive but “on” was not the preposition I expected. I was thinking near the building or in the building or maybe even around the building. That kind of makes me think there was some degree of athleticism involved in this, and with the culprit in his 60s, I’d be lying if I said I wasn’t impressed. Anyone can take a dump next to a building but it takes talent to go on one.

While no one should condone these acts, Churchwell deserves a pat on the back (followed by a prompt hand-washing) for what sounds like Spidermanesque feats.

I can’t even fathom what it would be like to be one of this guy’s students. Go to any school in America and you’ll hear urban legends about teachers with strange proclivities and habits but most of the tails have no basis in reality whatsoever. However, this one is true, and those kids will have a story to tell for the rest of their lives.

While it’s easy to laugh off something like this (unless you’re the custodian at Natureland Park), it’s not so amusing once you begin to see the bigger picture.

Back in July, a different Wisconsin man was sentenced to 150 days in jail and three years probation for clogging women’s toilets in a park and at his workplace.

It’s a bad look for Wisconsin but you can’t really expect phenomenal intestinal health from folks in a state where cheese is so ingrained in the culture that they wear it as a hat.

Wisconsin may be the Land of the Serial Pooper (new license plate slogan?) but other parts of the country are experiencing this scourge.

In 2018, police in East Granby, Connecticut used a motion-activated camera to catch 43-year-old Holly Malone in the midst of a fecal act in the middle of a cul-de-sac, something she is suspected of doing three times.

That same year, a town in New Jersey was victimized after several instances where excrement was found on or near a high school track and football field before it was determined that the culprit was actually the school’s superintendent.

These are only a handful of cases that have occurred over the last couple of years but I’m comfortable asserting serial pooping is an ancient act.

Public defecation was once accepted as a social norm (and sometimes seen as a good-natured goof), but since the advent of the toilet, most of society turns up (and plugs) their nose at such an act.

It seems impossible to stop this sort of crime before it occurs but perhaps we can build a profile of the type of person who would be most inclined to take to serial pooping.

Let’s first look at whether or not gender has anything to do with one’s inclination to unload a deuce on private property.

Of the four examples we’ve looked at, three of the culprits were men. Even with such a small sample size, I think we can confirm that men are more likely to perform such an act. I’m no psychologist, anthropologist, behaviorist, or even a smart person for that matter but I would assume that it could be an act akin to marking one’s territory that’s popular with males of many species. It’s also not dissimilar from urinating off of something high in the air. Fellas know what I’m talking about.

However, I don’t think marking territory is the motive behind the pooping. I think most of the subjects we’ve looked at are doing what they do for the rush of adrenaline that undoubtedly comes with relieving oneself in public. They are “thrill poopers” who feed off the prospect of getting caught and alluding authorities.

Interestingly, I would not put our lone female culprit into that category. No, she was trying to send a message.

According to the article, Ms. Malone was suspected of doing her business directly in the center of a cul-de-sac. I’ve taken the liberty of drawing a small diagram to give you a better idea of how things went down: 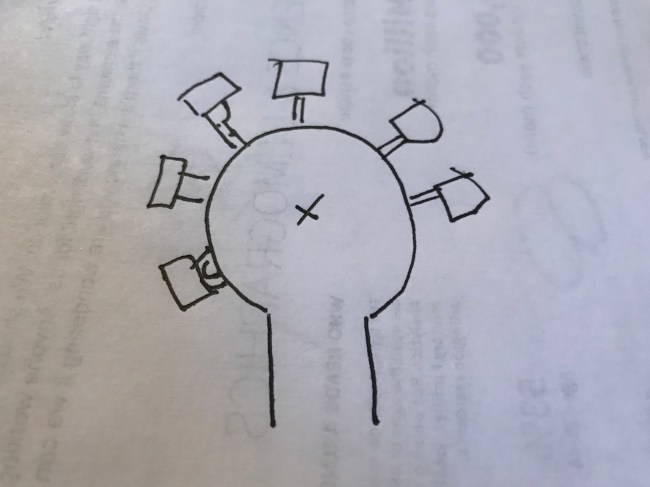 But what is she trying to tell us? That’s much harder to discern. It could be a way of taunting the police. It could be some sort of performance art piece. It could even be the first in a series of clues that would lead to a map on the back of the Declaration of Independence and eventually a great treasure—maybe even a national treasure.

Or maybe some lady just took a dump in the street.

Sometime’s it’s tough to tell with these things.

However, after examining all of these cases, I’ve realized the scariest thing about the serial pooper, is that it’s difficult to craft a clear profile. The next one is likely a total stranger to you but they could just as easily be your friend, your neighbor, or—as we learned today—your high school English teacher.