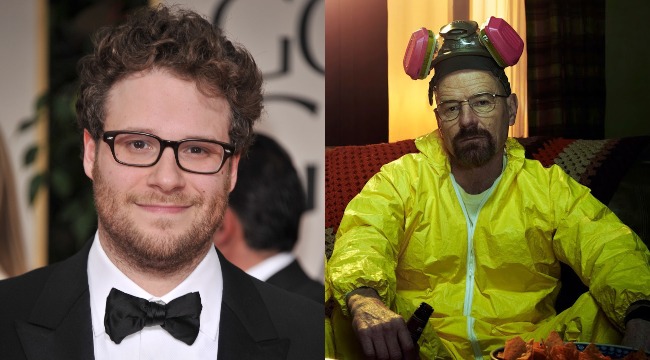 Seth Rogen made an appearance on Jimmy Kimmel Live Monday night to shed light on one of America’s most troubling deficiencies: weed edibles.

The spectrum of experience is simply too wide from one bite of a delicious gummy bear. If the product requires a mental calculus over whether the opportunity to bounce on rainbows is worth the possibility of a four-hour THC-fueled panic attack and unwanted contemplation of your parents’ mortality, the product is too damn strong.

That’s why Rogen’s new weed company, Houseplant, solely sells smokeable weed, a welcomed relic of a simpler time when  communal blazing with Hoobastank’s The Reason playing in the background at Paul’s dad’s lake house was King.

Kimmel asked Rogen if his company plans to rollout edibles in the U.S. to expand their product offering,

“We hope to one day. We sell beverages in Canada but in Canada the infrastructure is far more institutionalized. So you can kind of recreate an effect more consistently with edibles, whereas in America they’re not quite there yet. And edibles, I’ve had, like, very scattershot experiences, I guess you would say.”

Rogen then detailed a nightmarish experience he had at the Golden Globes in which he was so high, even Walter White was concerned.

“I had one experience at the Golden Globes, actually, many years ago that was pretty bad, yeah,” he said. “Because the thing with edibles is, there have been times where I thought I was fine but I was not. And that’s what’s scary about edibles is you don’t even know what they’re doing to you. I was at the Golden Globes, which are a nightmare, so I had a weed lollipop throughout the show and I thought in my head, I was like, ‘I’m really high but I’m keeping it together.’ That was what I kept thinking in my head. I was like, ‘Man, this thing is fucking me up but at least I look and am acting totally normal.’”

“I went to an afterparty and I saw Bryan Cranston, who I don’t know that well,” Rogen said. “But I saw him and the first thing he said to me was ‘Are you okay?’ which is an alarming question to be asked when you think you are okay … When you just think you’re doing good and someone looks at you, like very scared and says ‘Are you okay?’ it’ll really bring you back down to Earth.”

Anyone who’s been asked ‘Are you okay?’ during a uncomfortable high experience knows that those three words unlock the doorway to hell.

‘Are you okay?’ says the man who for six years played a character who cooked meth in a van and let people choke to death on their own vomit.

“That guy’s seen some things,” Rogen joked. “If I was alarming to Walter White, I must have been fucked. And he said ‘Are you okay?’ and I turned around and left and I literally, I walked out of the hotel that the show was in and got in my car and I went home and I was like, no, the answer is, if you’re asking me, the answer’s no. I’m not okay. I’m getting the fuck out of here.”

Seth will never make that mistake again. He should just do blow next time like everyone else in Hollywood.