Settlers On Mars Who Die Could End Up Being Eaten By The Other Settlers, Say Experts 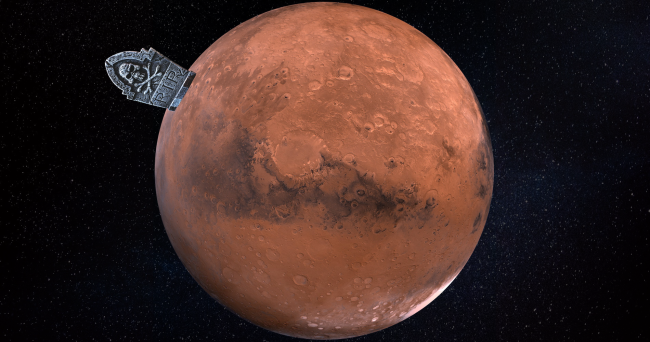 Last September, when Elon Musk, the future supreme ruler of Mars, said there is a good chance that the first human settlers on the red planet are going to die there, we thought that sounded pretty awful.

Fast forward to today, and we’ve got a slew of scientists and other experts who are here to say, “Hold my beer.”

Now that Musk has admitted that everyone who settles on Mars for the first time will almost certainly die up there, the question becomes, “What do they do with all of the dead bodies?”

It’s a legitimate question as it’s not likely the settlers are just going to break out a backhoe and start making themselves a cemetary up there.

Experts say that leaves them with three realistic options.

1) Burn the bodies (so as to not leave any organic material on Mars and break NASA’s rule about contaminating other planets with Earth microbes) and then bury the remains in some fashion.

2) Shoot the bodies off into space. (I wholeheartedly vote for that one. That’s how I’d want to go out.)

“Currently, there are no specific guidelines in planetary protection policy, at either NASA or the international level, that would address ‘burial’ of a deceased astronaut by release into space,” NASA’s Planetary Protection Officer Catherine Conley explained to Popular Science.

So it will really be up to whoever is in charge up there – perhaps Musk – to decide what to do with the body when a settler dies.

As for that third option, eating the dead bodies, DailyMail.com quotes bioethicist Paul Wolpe. (How does one get that job?)

“There are two kinds of approaches to it,” he said. “One says even though we owe the body an enormous amount of respect, life is primary, and if the only way one could possibly survive would be to eat a body, it’s acceptable but not desirable.”

So that option would, hopefully, only be a last resort.

Also, if someone happens to die while on the trip up to Mars, there’s a pretty good chance the body will just be placed into cold storage or freeze dried (outside the capsule) until the spaceship lands.

Unfortunately, the coolest option in that scenario, shooting the dead bodies off into space, creates a whole different (and rather gruesome) problem.

If a ship released a dead body into space it could become trapped in the path of the spacecraft and just sit there. Which means that future crafts passing through the area could eventually end up flying through a sea of dead bodies on their way to Mars.

Although, if the person dies before the ship gets too far into space, maybe the ship can just drop the body off at that hotel they’re building on the moon.