World’s First Space Hotel, Complete With Bars And Restaurants, Planning To Open In 2027 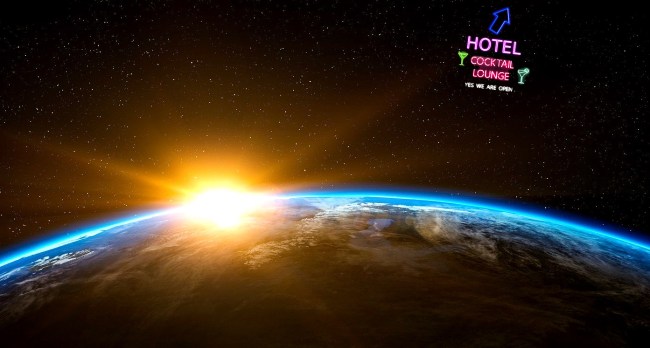 Elon Musk may be planning to put humans on Mars by the year 2026, if not sooner (where he will be the Supreme Ruler), and there may be a moon colony in the works that will house astronauts, but what about the average Joe just looking to get away for awhile?

The space resort will be constructed by Orbital Assembly Corporation which plans to begin building what they are calling the Voyager Station in low Earth orbit in 2025.

“The station will be designed from the start to accommodate both national space agencies conducting low gravity research and space tourists who want to experience life on a large space station with the comfort of low gravity and the feel of a nice hotel,” Orbital Assembly Corporation said in a statement.

Voyager Station will have hotel rooms for around 400 people, themed restaurants, a health spa, and libraries among the many amenties for the weary space traveler.

The space hotel, which will consist of two concentric rings, is supposed to circle Earth every 90 minutes, creating artificial gravity similar to what is felt on the moon, but the levels of artificial gravity can be adjusted by increasing or decreasing the rate of the space station’s rotation.

This will done because, as John Blincow, founder of Gateway Foundation – a company that will run some of the Voyager’s pods, says, “People need gravity so their bodies won’t fall apart.”

Our CTO Dr. Tom Spilker on the Space Show : "With Voyager Station, we don't want to have to develop any new technologies, we want it to be technologies that are already in hand, it's just that we are applying them in new ways to get a structure and a facility like that." pic.twitter.com/Hqs2gaOFnb

Of course, we have been promised such things for decades now. (Seriously, where is my flying car?)

It's 2019,where is my Lunar Hilton?! 🤔
In the 1960s,Barron Hilton described his vision of the hotel as 100 rooms built underneath the surface of the moon.
The space tourism will come eventually within the next decade.
They should start planning!😉
#hilton #spacetourism#spacex pic.twitter.com/VebcnWqRxD

But hey, one can always dream, right?

Maybe we can hook a ride with that Japanese billionaire who is looking for eight people to join him on his trip to space.

Flying around the inner ring in zero-g will be a rite of passage for passengers. We'll probably have a score board for how fast you can do it 😉

That actually sounds fun. I wonder what the rates will be to stay there. Think they’ll have some sort of travel package?