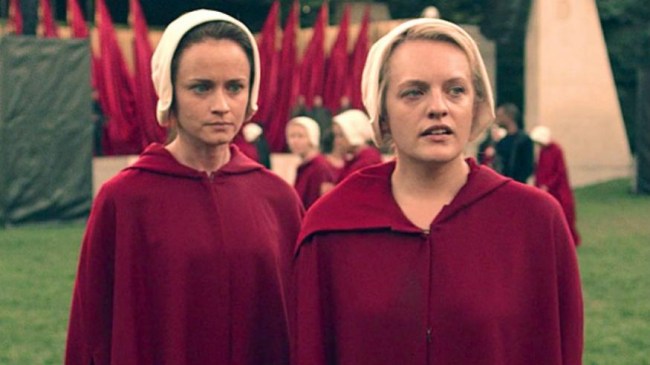 We are officially one month away from the internet plays judge, jury, and executioner for your Halloween costume!! If you plan to dress as a ghost, DON’T: it’s insensitive to ginger people. If you’re thinking of going as a Chucky, you’re appropriating Jon Gruden. If you want to dress as a witch, beware, you may get nailed on the cross for mocking my EX WIFE, AYOOO!

This year, the virtue signaling has begun in September, a full two weeks before the Oscar Pistorius ‘Blade Gunner’ Halloween costume was sahmed into non-existence last year.

In any event, online retailer Yandy listed a “Brave Red Maiden” Halloween costume for nearly $65 that includes a red cape, mini dress and white bonnet. Call it what you will, but it’s a sexy Handmaid’s costume vaguely depicting the outfits worn in Hulu’s smash hit The Handmaid’s Tale. For those unfamiliar, the show centers around a totalitarian state that treats women as property of the state and routinely rapes them to bear children for their masters.

Yandy tried to spin the costume as some sort of empowering garb.

“An upsetting dystopian future has emerged where women no longer have a say,” the description reads. “However, we say be bold and speak your mind in this exclusive Brave Red Maiden costume.”

Every year at Halloween I think "You know who's horrible? Yandy." and every year I get proven overwhelmingly correct. https://t.co/urvJHNE3gI

After the backlash became overwhelming, the Phoenix-based company pulled the costume from their site and released the following statement:

“Over the last few hours, it has become obvious that our “Yandy Brave Red Maiden Costume” is being seen as a symbol of women’s oppression, rather than an expression of women’s empowerment,” the clothing retailer said. “This is unfortunate, as it was not our intention on any level.”

Other people thought the backlash was largely insincere and called out a perceived hypocrisy.

The women bitching about about how offensive a sexy handmaid’s tale costume is are the same women who dress up as a pregnant nun for Halloween.

People were mad about a Handmaids Tale Costume so @Yandy removed it from their site. This is happens when upper middle class women don’t have anything to be mad about and want to get outraged. https://t.co/ZpyHLVQZY5

The fact that it only took a short amount of time for the Handmaid’s Tale costume to be removed while the “Pocahottie” and “Sexy Native” costumes remain just shows that the only women y’all care about are white women.

Yandy currently sports 43 costumes under the “Indian costume” section that are far more offensive than the handmaid’s tale rip off that was removed for being offensive.

Wouldn't the sexy Handmaid's Tale costume represent women's ultimate liberation? Breaking free of a patriarchal system, showing the world they can dress however they want?

Goddamnit. Halloween used to be fun.