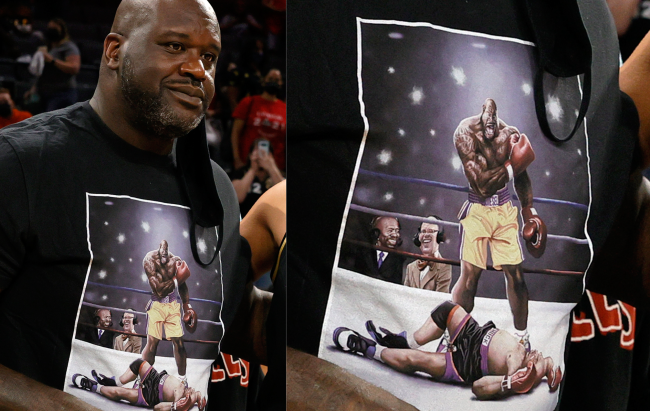 Skip Bayless may be worried that Charles Barkley actually wants to kill him, but now it’s Chuck’s turn to be afraid.

As he was freestyling, Shaq name dropped several of his cohorts over on TNT, including Kenny Smith and his frequent sparring partner Charles Barkley.

Related: Charles Barkley Fires Brutal Shot At Shaq While Confirming When He Plans To Retire

O’Neal wasn’t done there though. While making fun of someone’s hairline in the audience Shaq once again sideswiped LeBron James.

It looked like quite the bash. TMZ reports that there were about 250 people in attendance, including Bobby Valentino and 2 Chainz, as well as a tiger, because Shaq, as we well know thanks to Tiger King, loves him some tigers.

Related: Charles Barkley Suggested A Hilarious ‘Diet’ For Zion Williamson And Shaq Couldn’t Keep It Together

Perhaps Shaquille O’Neal was just looking for a little retribution against someone TNT-related after being humiliated by the NBA on TNT postgame show crew the other day.

During the show, they had a team of Shaqille O’Neals going up against a team of Candace Parkers in NBA 2K. Not only did Parker’s team beat Shaq’s, Shaq actually got up and walked off the set when he saw Candace dunking on him in the game.