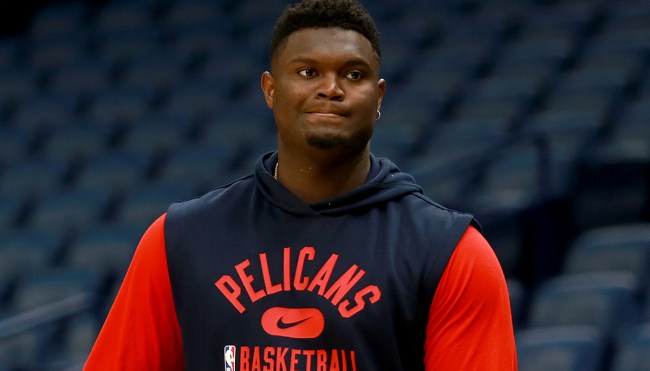 The Manningcast has been one of the most pleasant surprises of the most recent NFL season, but despite the amount of entertainment its provided viewers with, it can’t hold a candle to the level of hilarity we’re constantly treated to courtesy of the crew on Inside the NBA.

The quartet of Ernie Johnson, Kenny Smith, Charles Barkley, and Shaquille O’Neal has produced some truly amazing moments over the years thanks to their impressive chemistry and, more notably, the lack of a filter that makes the last couple of guys on that list some of the most entertaining figures the sports broadcasting world has to offer.

Earlier this season, Shaq and Chuck treated us to an all-time moment when Inside the NBA turned its attention to Zion Williamson’s well-documented weight issues during a segment where Barkley summed up the Pelican big man’s less-than-slim physique by saying “it looks like Shaq and me had a baby.”

That issue became the topic of conversation yet again on Thursday night following reports Williamson has headed to Oregon as he continues to rehabilitate the foot injury that’s kept him sidelined for the entirety of the season.

Barkley, who is very familiar with what it’s like to struggle with one’s weight, took the chance to share a piece of diet advice that Williamson could potentially harness, saying, “I’m going to put him on that diet I was on at one point: If it tastes good, spit it out”—a nugget of wisdom that caused Shaq to lose it.

Shaq and Chuck were in tears talking about Zion.

“If it tastes good, spit it out”

I haven’t see Shaq laugh that hard in a minute