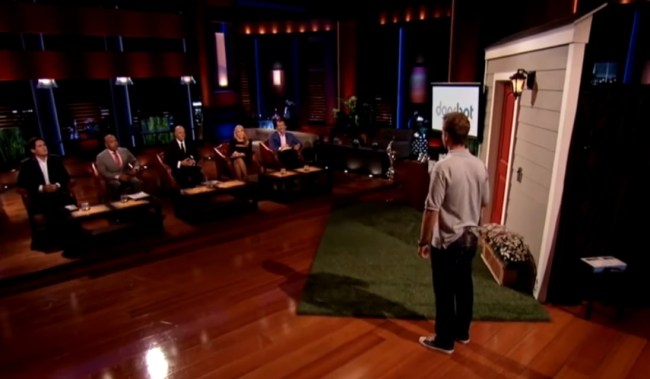 In 2013, Jamie Siminoff appeared on Shark Tank to pitch his DoorBot video doorbell. Siminoff was asking for $700,000 and he estimated the company was worth $7 million at the time. He was rejected by Daymond John, Lori Greiner, and Mark Cuban. Kevin O’Leary put in a very weak offer that Siminoff had to walk away from. A lot has happened to Siminoff since that episode of Shark Tank including Amazon purchasing his company for over $1 billion.

On Sunday, Siminoff returned to swim with the sharks, this time as a fellow wealthy investor. At the time, Siminoff was absolutely devasted after he was rejected by the sharks. “I remember after that Shark Tank episode literally being in tears,” Siminoff told CNBC. “I needed the money, we were out of money at the time.” Siminoff sunk $10,000 for the house props for the TV show and DoorBot’s eight employees spent a month preparing for the pitch.

However, the Shark Tank appearance gave Siminoff’s business exposure that would be worth millions — literally. Sir Richard Branson, who has a net worth of $5 billion, saw Siminoff’s pitch and invested in the video doorbell company, which changed its name to Ring. In February of 2018, Siminoff’s Ring was bought by Amazon for between $1.2 billion and $1.8 billion. Now Ring has 1,300 employees and their Wi-Fi-enabled video doorbells are sold in 16,000 stores.

Siminoff appeared on the Season 10 premiere of Shark Tank and he was ready to remind the sharks what they could have been a part of. Ring is widely considered to be the “biggest mistake” by the sharks in the history of the show.

Remember Jamie Siminoff? Well, he's back, but this time it's a little different! #SharkTank pic.twitter.com/mrDL2GIIG1

“Well, well, well, look who’s back,” Mr. Wonderful said to Siminoff as he appeared on the show. “I was the only one that believed in you. … You deserve your seat there.”

“I definitely busted some chops, had some fun, because I earned it,” Siminoff said of the reunion. “I earned the ability to go in there and tell Kevin that he’s not that smart, that he’s not Mr. Wonderful. I told Mark that he didn’t know what a tech company looks like…I really had fun with them.”

As an investor on the hit ABC show, Siminoff was presented with a company close to his expertise. The first pitch to Siminoff as a shark was a company called BoxLock, a smart padlock that can be unlocked when it is used to scan the delivery number on a package. Delivery people then drop the package inside a box and re-lock. It prevents porch pirates from stealing packages.

“It wasn’t long ago that someone very much involved in security came in here and asked for a ridiculous valuation,” O’Leary said as a joke to Siminoff. “I was the only shark that believed in him, and now look what happened.”

“I literally sold my company for over $1 billion to Amazon, so I know package delivery. I control front doors,” Siminoff told BoxLock CEO and founder Brad Ruffkess. “I don’t like that you have to change user behavior to do this. Why Ring worked is we didn’t have to change the behavior of the customer. It still was a doorbell, it still worked, it just enhanced it. This changes where you put the package, how you deliver the package, the timing of the package. To ask for a $20 million valuation, it’s so far away from me — I’m out.”

Let’s hope for Siminoff’s sake that passing on this security company doesn’t come back to bite him in the ass.