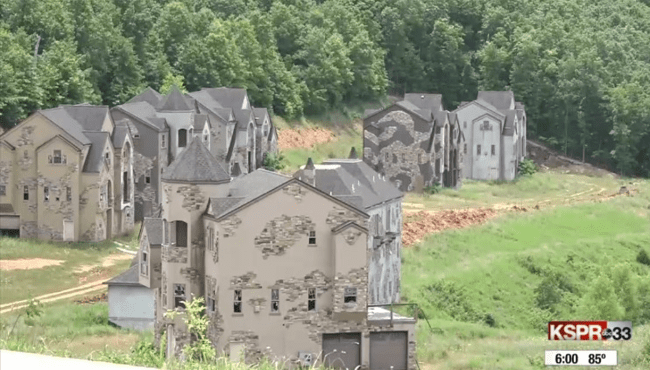 The sheriff of Stone County in Missouri has issued a warning to TikTokers telling them that they need to stop flocking to the billion dollar ghost town located in his jurisdiction near Branson.

The failed Indian Ridge Resort has been sitting unfinished with numerous vacant McMansions rotting away since federal regulators shut down Columbian Bank and Trust in 2008 because of the banking crisis at the time and arrested the developers on charges of fraud, reports KY3.com.

Now, thanks to footage that has gone viral on TikTok, referring to the area as a “ghost town,” hundreds of people are flocking to the abandoned property after video shot by area lawyer Carrie Jernigan’s video of the crumbling resort was viewed over almost 16 million times and produced over 27,000 comments.

As Jernigan tells it, the 900-acre, $1.6 billion Indian Ridge Resort Community was part of a real estate fraud scheme that claimed it would be building numerous houses and condos, a large hotel with the second-largest indoor water park in America, a golf course, a marina, and a Native American history museum.

A follow-up TikTok video posted by Jernigan that shows a sign advertising “lots for sale” with a realtor’s phone number on it has also been viewed over one million times.

♬ Send Me on My Way – Vibe Street

Due to the popularity of Jernigan’s TikTok videos, the local sheriff has issued a warning to TikTokers planning to the area that the abandoned resort is not a tourist attraction.

“A recent Tik-Tok video went viral about the Indian Ridge development that went bankrupt,” Stone County Sheriff Doug Rader wrote on Facebook. “This has caused this location off of 76 Highway to become a tourist attraction. THIS IS PRIVATE PROPERTY AND YOU CAN BE CITED FOR TRESPASSING!

“Our Deputies are very busy handling calls for service and really do not want to write people tickets for trespassing. Please do not enter the property. Please do not trespass on the property. It has been a constant flow of people walking down in the development all weekend. Please go visit our many other tourist attractions in Stone County including Table Rock lake! Thank you!”

According to Fox 2 News, four people plead guilty in 2015 over the real estate fraud scheme, but new developers have since purchased the property and still plan on developing the area.

“We’re getting ready to put a new traffic light in to begin some construction on this property,” said Dennis Dougherty, a partner with M D & D Investors LLC, who purchased the land in 2018.

“We feel like the traffic light is going to be a big game changer for our landscape right here to show that we’re finally getting something done on this property.”

One suggestion by a commenter on TikTok summed up the current situation quite nicely.

“People are already going to look at it. The city should just take it over and charge an entrance fee for those whom want to visit the site!”