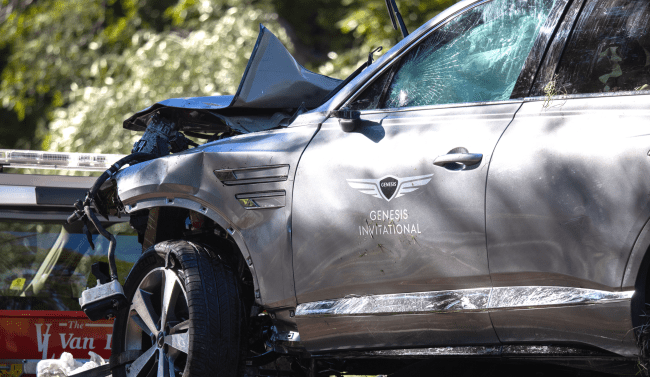 In the span of two weeks, Los Angeles County Sheriff Alex Villanueva went saying he was planning a press conference to announce the cause of Tiger Woods’ crash to not relasing any details at all.

On Wednesday, it was revealed that investigators had finished their work.

“A cause has been determined, the investigation has concluded,” Villanueva said.

When asked to share more details about the cause of the Feb. 23 crash, Villanueva declined to share any specific information.

This stance is a complete about face from March 17th when Villanueva told the media, “Yes, we’ll have the full thing released, and we’ll do a full press conference and that, because I know there’s going to be a lot of questions and we’ll pick it apart.”

Wednesday night, The Golf Channel published an article about the investigation and in the story it said, “According to NBC News, however, a LA County Sheriff official said the accident report could be released publicly next week.”

That sentence has since been removed from the article.

As for why Villanueva is refusing to share any details about the cause of Tiger Woods’ crash, he claims it is a privacy issue, telling the media, “We have reached out to Tiger Woods and his personnel. There’s some privacy issues on releasing information on the investigation so we’re going to ask them if they waive the privacy and then we will be able to do a full release on all the information regarding the accident.”

The release of accident reports is governed under California Vehicle Code Section 20012. When we are able, we intend to release the information learned during the traffic collision investigation involving @TigerWoods.

Following the crash, Woods reportedly told deputies that he did not know how the crash occurred and didn’t even remember driving, so there is obviously more to the story.

The Sheriff’s Department also did not seek a warrant for Tiger Woods’ blood for testing following the crash.

“You have an accident and you have deliberate acts,” Villanueva told USA Today during a Facebook livestream session. “It’s an accident, OK. We’re reaching out to Tiger Woods to be able to release the report itself, and nothing has changed from what we know and what we learned throughout the course of the investigation. And everything we did turned out to be accurate.”

However, according to The Golf Channel…

The section of state code cited by the sheriff’s department does not govern the release of the information outside the so-called “accident reports.” It says those reports must be confidential but can be disclosed “to any person who may have a proper interest therein.”

Greg Risling, a spokesperson for the Los Angeles County district attorney, said in an email Wednesday that no felony or misdemeanor complaints against Woods had been filed through the district attorney’s office regarding the crash.

Villanueva’s statement about privacy issues did not make sense to Joseph Giacalone, a professor at the John Jay College of Criminal Justice and a retired New York City Police Department sergeant, who has criticized the sheriff’s response to the Woods incident from the start.

“I don’t think I’ve ever seen a department ever ask for permission like that,” he said. “What happens if his lawyers say ‘no, you can’t send it out now.’ And then where does that leave us?”

Giacalone said it’s unlikely that deputies would have sought the permission of non-celebrity victims in similar crashes to release information.

Giacalone added, “I don’t think they would have asked any family member of us if they can come out with it.”

Give TMZ a week and it will be the perfect time for the cause of the Tiger Woods crash to be released during the Masters. Just watch.