Tiger Woods Seemed Unaware Of ‘How Gravely Injured He Was’ After Crash, Says First Deputy On The Scene 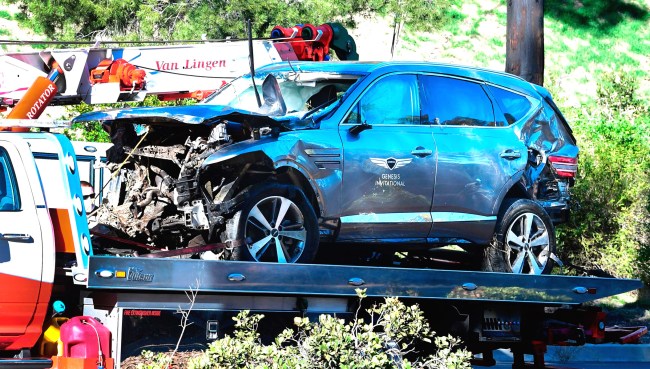 According to Los Angeles County Sheriff’s Deputy Carlos Gonzalez, who was the first to arrive on the scene of the Tiger Woods crash scene on Tuesday, the golf legend appeared to be unaware of just how hurt he was.

Speaking to NBC’s Today show on Wednesday, Gonzalez recalled coming upon the site of the accident and having the neighbor that called 911 tell him, “Deputy, I think someone is still inside the vehicle.”

“So I run over, and I’m able to get my upper body through the windshield,” but it was too dark inside the vehicle to identify the accident victim, said Gonzalez.

“My first role as a first responder is to assess the passenger, the occupants, of the vehicle and I want to keep them calm as well,” Gonzalez told Today. “So I ask him, ‘Can you tell me your first name?’ He looked at me and he said, ‘Tiger.’”

“And it took me a half second, but I saw his face and I thought, ‘Oh yeah, you’re Tiger Woods,’” he continued. “But of course, I’ve got a job to do, so I immediately went into assessment questions to gauge what his condition was in and what his mental state was at the time.”

When he realized he was not going to be able to extricate Woods from the vehicle by himself, Gonzalez says he waited with Woods until further assistance arrived.

“I kept him talking,” said Gonzalez, who said Woods seemed calm while they waited. “I asked him basic things to gauge his mental state, like do you know where you are right now? Do you know what day it is? You know, just to see if he was aware of what had occurred.”

He said once they got Woods out of the vehicle the golf star was unable to stand on his own and appeared to not be aware of “how gravely injured he was” – something the Deputy chalked up to “adrenaline and shock.”

Tiger Woods’ team issued a statement late Tuesday night stating that the PGA legend was “awake, responsive and recovering” after going through extensive surgery to repair his damaged right leg, foot and ankle.