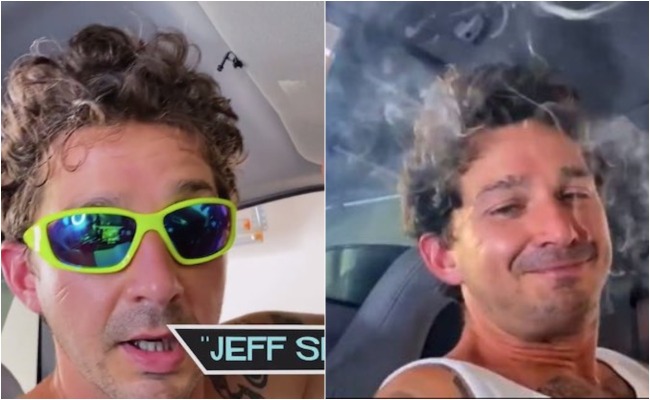 Are you thinking about hopping on the Shia LaBeouf bandwagon? Well, guess what, I’m the captain of this bitch, so welcome aboard, sailor.

Over a year ago — in fact, I think it was my first week working for this wonderful website — before The Peanut Butter Falcon and Honeyboy had been released and *rumors* of him joining the Marvel Cinematic Universe (as either Iceman or Moon Knight) had begun, I wrote an article titled Why We Love Shia LaBeouf.

The gist of the piece was, more than anything, that LaBeouf marches to the beat of his own drum, and that’s something I truly admire, especially when you have every incentive in the world to conform to the norms of your profession. Still just 34-years-old, Shia LaBeouf has had every chance to sell out and cash in. But he hasn’t, he’s remained his expertly weird self since he first arrived on the scene over a decade ago, and now, after fighting through some immense personal issues, seems to be on the verge of another major career comeback (see: Marvel rumors).

LaBeouf is obviously respected within the industry as well, as he was invited to play Jeff Spicoli in a live table read of Fast Times at Ridgemont High alongside legitimate modern-day acting legends such as Sean Penn, Brad Pitt, Morgan Freeman, Julia Roberts, Matthew McConaughey and Ray Liotta.

And just like LaBeouf stole the show in Fury — a movie that starred the murderer’s row of Pitt, Jon Bernthal, Michael Pena, and Logan Lerman — he stole the table read as Spicoli, once again exhibiting the method acting he’s become so famous for (dude once pulled his own tooth out to prepare for Fury). Needless to say, the internet was absolutely loving it.

When I tell you Shia LaBeouf was DEDICATED to this role. #FastTimesLive

If I’ve said it once, I’ve said it 1000 times: Shia LaBeouf is the greatest actor of my generation 😂 pic.twitter.com/uiqwPEvhcR

Is Shia LaBeouf wasted or the greatest method actor of our generation? pic.twitter.com/mRMkRu5h7i

Get me the weed that Shia LaBeouf smokes pic.twitter.com/0aU7eLkrgd

Love for Shia Labeouf increasing by the second #FastTimesLive pic.twitter.com/WaB6J1D0Qy

Ok but Shia LaBeouf is literally that kid in the adults groups chat pic.twitter.com/9E455MEhnk

SCREAMING at the Fast Times at Ridgemont High table read. Shia LaBeouf is doing it from the drivers seat of a pickup truck. Sean Penn is vaping and unable to control his laughter. MORGAN FREEMAN IS NARRATING.

You can check out the full table-reading of Fast Times at Ridgemont High, which was in benefit of CORE’s COVID-19 relief efforts, below: