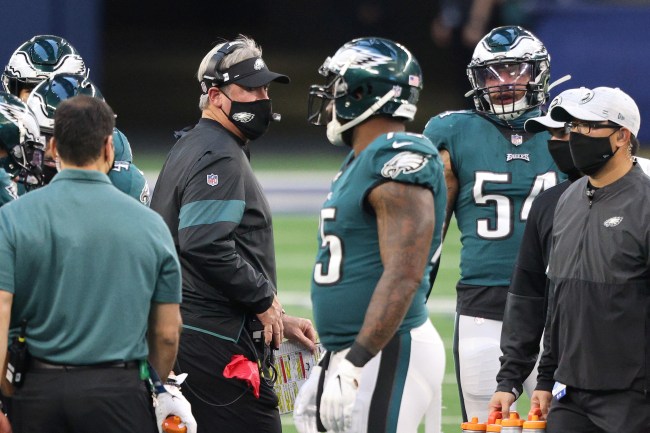 It seems like Eagles players weren’t happy with head coach Doug Pederson with his strategy on Sunday night.

During the team’s final game against Washington, Pederson made the bizarre decision of benching starter Jalen Hurts for Nate Sudfeld in the second half of a close game which led to accusations of tanking from fans.

According to Jeff McLane of the Philly Inquirer, several Eagles players were angry with Pederson for benching Hurts. McClane goes on to say that at least two players had to be held back from confronting Pederson on the bench.

When Doug Pederson pulled Jalen Hurts for Nate Sudfeld early in the fourth quarter in Sunday’s season finale against Washington, many Eagles players and coaches were shocked and outraged, team sources told The Inquirer.

Some were angry. Two defensive players had to be held back from approaching Pederson. Center Jason Kelce and another offensive starter went to the coach to ask him why he had pulled the starting quarterback with the Eagles trailing by only three.

Even Hurts seemed disappointed with the move when cameras caught him saying “it’s not right” while on the bench.

Hurts knew the fix was in. Clearly dejected. Obviously says “it’s not right” and shakes his head. pic.twitter.com/rSZibS4HZn

After the game, Pederson denied trying to tank and said he just wanted to get Sudfeld some snaps before the end of the season.

Doug: "Yes, I was coaching to win. Nate has obviously been here for four years and I felt that he deserved an opportunity to get some snaps. … Ertz is out there, Brandon Graham is out there, Darius Slay is out there. All our top guys are still on the field at the end."

Doug Pederson explains why he took Jalen Hurts out of the game vs. Washington: pic.twitter.com/chB3dxTRE3